Sailing Down the Baja

Our long hiatus--from cruising but not from boat projects--ended on Tuesday, January 17, when we finally headed out of San Diego and across the border. The trip to Ensenada was uneventful, except for some excellent marine mammal viewing. We saw several large gray whales (spouts and backs) and a couple schools of dolphin came to bow-ride. At one time there were about twelve dolphin under the bow simultaneously, rolling over and posing for the camera photogenically, and I could hear their whistles and squeals from where I stood on the bow! I thought I had captured some amazing video footage to share with the folks back home, only to arrive at the dock and found I had neglected to press a very important button before turning off the video camera. Judging from our trip thus far, there will be other opportunities, and we hope to start posting some video footage soon.

After arriving at Baja Naval Marina and getting Silhouette moored to the dock before the surge there sent her bowsprit thrusting into a piling, I looked up to see my friend’s boat, Traveler, almost directly across the dock from us. We have been following Traveler’s blog, and it was nice to finally see her in person. Unfortunately, Scott and Connie (Traveler’s owners) had just returned to Seattle, but we met their friend Lindor who was staying on and looking after the boat.

Ensenada was our official port of entry into Mexico, and we completed check-in the next day. Even though we had made copies of our official documents before leaving San Diego, we still had to make copies of our Mexican tourist cards after receiving them; and the process took close to two hours as we shuffled from one window to the other (Immigration, Bank, Immigration, Port Captain, Bank, Copies, Bank, Customs…)—waiting in lines that at this time of year, consisted mostly of local people doing business—in the Centrally Integrated Services building. I cringe at the thought of what that process is like during the height of the Ba Ha-Ha. Note to fellow cruisers:  Be sure to bring your dinghy outboard serial number (if you have one) as well as your engine serial number with you when checking in. These are required on the customs form. The rest of the gear list is a simple checklist.

After checking in, we went back to the dock and hoisted our Mexican courtesy flag. 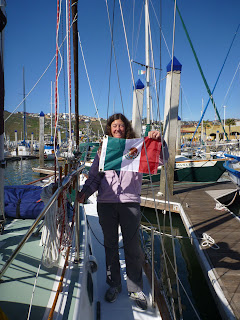 We only spent a day in Ensenada, where we exchanged dollars for pesos, enjoyed some celebratory fish tacos and cervezas, and did a little grocery shopping for the trip south. My lasting impression of Ensenada is of the public art, and I’m sure there is much more to discover. We saw these sculptures very close to the marina, as well as others that we didn’t photograph—such as a beautiful bust of the female torso in El Centro (downtown)--due to being without a camera at the time. The morning we left, a trumpet player sat on the rock wall next to the harbor playing beautiful jazz while sea lions barked in the background:  Bienvenidos a Mexico! (Welcome to Mexico!)

Our next stop was a two-day-plus sail away to Bahia Tortuga (Turtle Bay). We had 15-26 knot winds and following seas most of the way there, but when the wind dropped, we motored the last few hours to reach the unfamiliar port before dark. En route, we had our first close views of the Baja coast. The stark topography dressed in its pastel colors reminds me of the “Painted Desert” in Arizona. 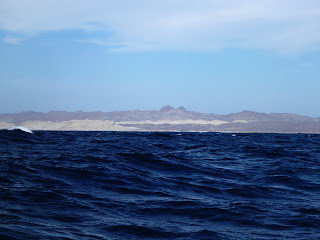 We spent a rest day in Turtle Bay catching up on sleep and working on minor boat projects. We didn’t go ashore there but took two jerry cans of fuel from a panga (an open boat used for fishing or as a runabout). The weather forecast predicted 25-30 knots for Tuesday (1/24/12), so on Monday (1/23) we headed for Bahia Asuncion to get 50 miles under our belts before hunkering down for a day. The wind quickly built from 8 knots to 20 knots after leaving Turtle Bay, and we had another fabulous sail down the Baja coast, arriving at Asuncion just at sunset. The prevailing winds along the Baja have been NW to N, so we have been traveling on either a reach or a run the entire time.

The small coastal villages of Turtle Bay and Asuncion appear similar from the water. Nestled on the edge of a bahia or bay and dwarfed by the surrounding mesa, each town has one or more communication towers, a few pangas (and visiting sailboats) anchored in the harbor, a church, and a disparate assortment of other low buildings along the shore.

Today, while inflating the dinghy for a visit ashore, a panga pulled up alongside Silhouette. The fishermen inside offered us a fresh lobster (for free). We declined, not knowing exactly what to do in this situation. We didn’t want to take something so valuable for free, but we also didn’t want to insult the fishermen by paying for it. We made several more “first-timer’s” mistakes today, over-paying for a six-pack of beer in one market and possibly under-tipping a man who volunteered to watch our dinghy for us (which probably wasn’t necessary). While there is a lot of information published about cruising in Mexico, we haven’t come across many tips on proper etiquette in these situations (except on mores about dress), and we would find some useful.

We explored the town of Asuncion this afternoon. How shall I describe it? A mixture of the sacred… 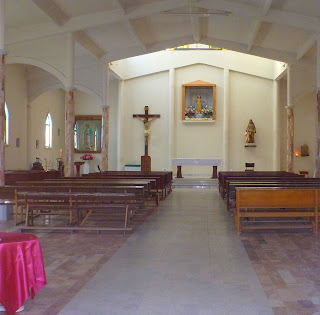 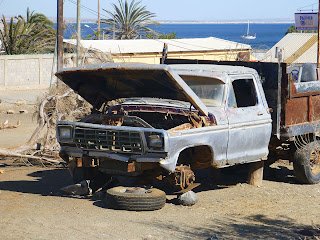 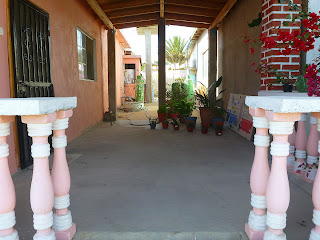 The town church was the centerpiece of Asuncion. 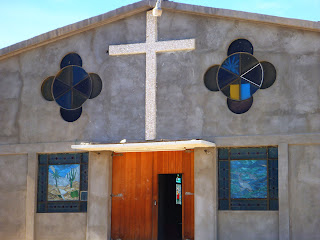 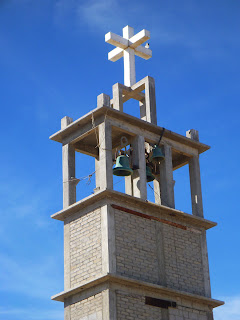 Most of the town’s businesses were located along a main street, where each vehicle politely stopped at every stop sign before proceeding on its way. (This seemed extraordinary to us, having come most recently from southern California!) We saw what we concluded were solar hot water heaters mounted on quite a few roofs. 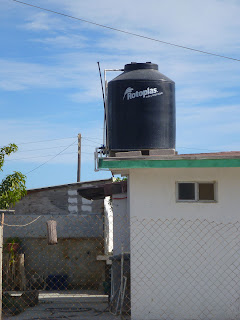 Many of the local people are fishermen and make their living from the sea. There was a water purification plant in town which displayed this sign:

Our feelings exactly.
Posted by SV Silhouette at 10:27 PM