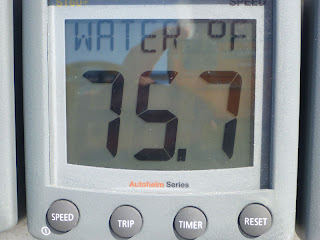 We thought Los Cabos deserved a new post because they are a transition zone between the Pacific coast of Baja and the Sea of Cortez, and they have a totally different feeling than anything that comes before or after. If someone visiting Mexico used the line, “Show me the money!” Los Cabos is where you’d take them.

Our cruise from Bahia Magdalena to Cabo San Lucas was uneventful, so we spent a lot of the trip obsessively focused on food. (Those who know me, stop laughing!) Patrick had his birthday, and there were chocolate brownies to be made and eaten. Although we trolled a great portion of the time, we caught nary a yellowtail or dorado. We ran out of our second loaf of bread since leaving San Diego (one purchased in San Diego and one loaf of the famous Mexican “Bimbo” brand bread), so I baked some. 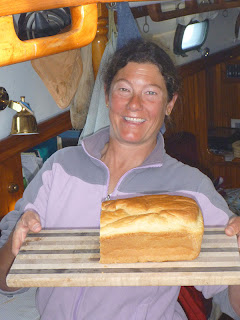 We could see Cabo Falso (the name is self-explanatory) from miles away. It is quite a striking feature, even from a distance. 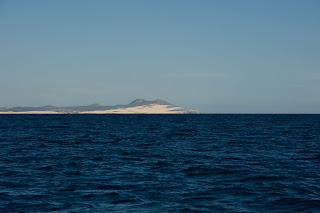 After awhile however, Cabo San Lucas (the true cape) juts out behind Cabo Falso, and one’s jaw drops. To two people who had been at sea for two weeks, only experiencing small Mexican villages, this was total culture shock. 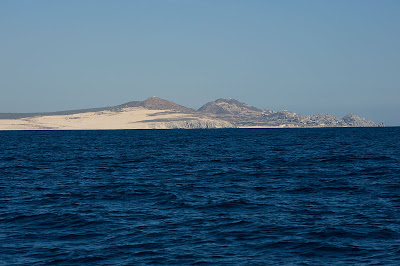 It was very intriguing how some of the buildings seemed to spring out of the rock itself. 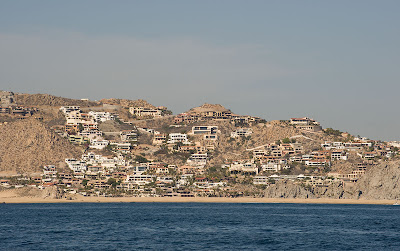 We were also blown away by how steep a slope our neighbors south of the border are willing to build on. 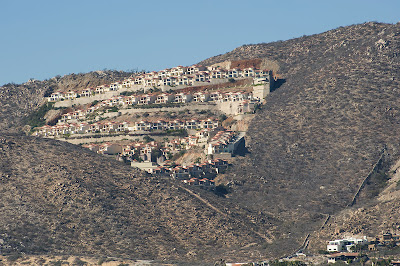 We passed by the famous arches at the southernmost tip of Baja. 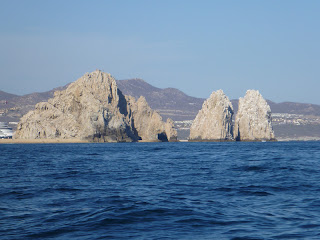 Since we did not have time to make our intended destination, San Jose del Cabo (the other Cabo) by dark, we decided to anchor in Cabo San Lucas for the night. We arrived just before sunset and had time to take in some of the excess which the harbor at Cabo San Lucas epitomizes. We had read about the huge variety of vessels rushing to and fro in this harbor on the blogs of other boats traveling south. While we were there, we saw fishing boats (both small and large), glass bottomed boats, water taxis, water skiers, other sailboats, mega-yachts, parasailors, and cruise ships in the outer harbor; while buildings that looked like the glitziest casinos Vegas has to offer lined the shore. 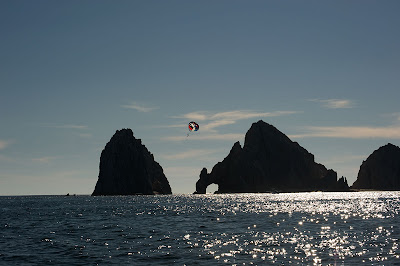 The best way not to part with your money in Cabo San Lucas is not to get off the boat, and that is exactly what we did. We anchored for the night and headed for the marina at San Jose del Cabo (Marina at Puerto de Los Cabos) the next morning. We spent a day there resupplying
and another day, just because we liked it.

Puerto de Los Cabos was one of the most nicely landscaped marinas I’ve ever seen. It was more expensive to stay there than at most Washington marinas, but it was still a lot cheaper than Cabo San Lucas. 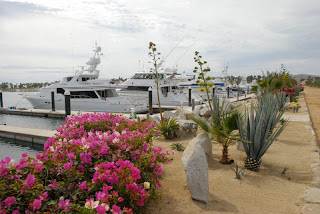 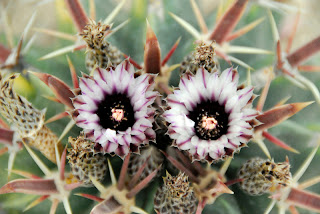 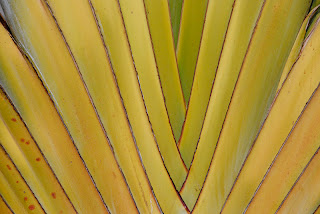 Sculptures and paintings by the Mexican artist Leonora Carrington were on display along the walkway in the marina. Although her vision is somewhat dark, and I didn’t care much for the attenuated figures in most of her paintings and sculpture, I did like these two pieces:

We thoroughly enjoyed the people and hospitality of the town of La Playita, which in fact, is closer to the marina than San Jose. La Playita used to be a small fishing village, but development springing up is transforming it into a tourist resort. We patronized the three eating and drinking establishments next to the dock with their three different sets of proprietors and staff. If the United States is a melting pot, than Los Cabos must be the melting pot of Mexico. We met Ali (a bellydancing aficionado from the Sahara via Koln, Germany); Gustavo, a native of La Playita and a fountain of information on the local fishing, who worked at Tommy’s Barefoot Cantina (where “happy hour” lasts from one ‘til six); and George Armstrong (an affable American who owns a hotel named La Marina and whose passion is golf.) All of them took the time to talk with us and share their philosophies. We particularly enjoyed the international photos at Ali's, the two-for-one house margaritas at Tommy’s, and the live music, chef, personable wait staff and patrons at the hotel. After two weeks with little outside social contact, San Jose del Cabo was a lot of fun.

We also learned about some of the negative impacts of tourism in this region. The Marina at Puerto de Los Cabos is situated across from a beautiful estuary, and we learned from a local that the estuary is slated for development for more hotels. 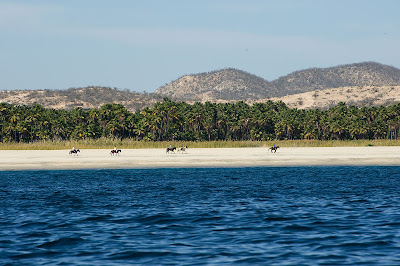 The local man told us that people from outside the area are happy about it because it means more opportunities for work, but that people who’ve lived in La Playita all their lives are unhappy about it. Our friend explained that all the work in Los Cabos revolves around tourism, and he made the following wry observation:   “If you can’t speak English, you toil under the sun all day; if you speak English, you work in the shade of a palapa.”

The trip started off with a bang. Immediately after leaving the breakwater in front of Puerto de los Cabos, Patrick noticed a flurry of pelicans diving for fish. Before I had even finished reeling out line, I got a strike. The first fish took some skin off my finger, when the line started whizzing out from underneath it, and my lure. The second fish broke my line and took another lure. We had just lost our two best lures. We were fishing with only 20 lb test, so Patrick got out the big guns (some actual small diameter ship’s line and a leader) and trolled yet a third lure behind the boat. He was rewarded with another large skipjack (10-20 lbs) but chose to release it because it was too big for our needs.

The next excitement came when we passed through an entire pod of whales. We are in humpback country now. On the way from Cabo San Lucas to San Jose, we had spied a mother humpback nursing her calf very close in to shore. Today, we observed a very active pod of humpbacks tail slapping and occasionally  breaching. It was the first time I had seen a single whale repeatedly slap its tail against the surface of the water. (For those of you old enough to remember The Flintstones, think of “Bam-Bam.”) The humpbacks also waved their enormous fins from the surface. 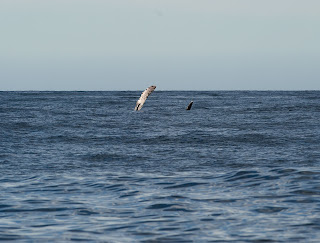 We thought we were keeping a respectable distance from the whales, but two whales suddenly surprised us by surfacing right in front of the boat (and diving again just as quickly.) Luckily, we didn't hit them.

During the time we were whale watching, the wind had come up significantly, and we put up sail. The wind and waves built quickly, and we experimented with a couple of different sail combinations until we settled on a reefed main (one reef) and the staysail. That combination seemed to give us the best combination of stability and speed. The progress was slow, now that we were beating to weather instead of running down the Baja coast.

That night, we anchored at Los Frailes, the most beautiful anchorage of our trip thus far.


There, we saw our first manta rays catapult from the water and flap their “wings” in the air. What an amazing sight! The next morning, we were treated to this display as dozens of manta rays appeared to greet the morning sun. If you listen carefully, you can hear the sound of the manta rays plopping back into the water.

After a layover day waiting for the wind to settle down, we continued on to the “Bay of the Dead,” Bahia de los Muertos. There was nothing in particular to recommend this anchorage, but it was a logical stop before proceeding the remaining 52 miles to La Paz.

The next day, we started out with a forecast for ten to fifteen and high hopes of reaching La Paz by evening. The picture below shows our intended course (solid line) as well as our actual track (dotted line) after leaving los Muertos. I took that picture before we got back to the anchorage; otherwise, it would have been a complete loop. When we got to the entrance of the Cerralvo Channel, we had been forced to reconsider our plan. The wind was 24-27 knots on the nose with gusts up to 32 knots. Since we didn’t have to do it, we decided we didn’t want to beat ourselves up trying to make La Paz, and we went back to the anchorage. Mother Nature seemed intent on dealing us some discomfort however, because the wind shifted from the north to the south (That would have been sweet if we were still in the channel!). Bahia de los Muertos is well protected from the prevailing northerlies but not winds from the south or east. We spent an uncomfortable afternoon and evening pitching in the anchorage. You know it’s bad when you start to feel seasick at anchor!

The wind had died down by morning, so we started out again. Initially, we had twelve to fifteen knots (still on the nose) in Cerralvo Channel, and it was exhilarating being under Silhouette’s full complement of sails. We pointed as high as we could and tacked back and forth across the channel. Then, the wind built yet again; our angle of heel became too much; and we had to reduce sail. We again furled the headsail, put a reef in the main, and kept up the staysail. Silhouette was more balanced under this combination, but her speed slowed to only a couple of knots. We decided we wanted to get to La Paz that night, so we ended up motor-sailing the rest of the way.

Our progress was interrupted temporarily when the engine overheated. I continued steering the boat on our tack, while Patrick went below and investigated. He found a blown impeller. We had most likely picked up some of the fine "mermaid's hair" type seaweed in our last anchorage, blocking the sea water flow cooling the impeller. Patrick put in a spare impeller and solved the problem. The wind and waves in the channel continued to increase as the late afternoon and evening wore on. Our faces tingled with salt spray as Silhouette bucked the huge swell. (I can imagine what the Cerralvo Channel could throw at you on a really nasty day.) We finally dropped anchor in La Paz at 10:00 p.m. on February 9, after a fifteen-hour trip.

(You may have noticed our blog is lagging behind real time. We have a slow internet connection at the moment, and it took us awhile to get this post together.)

Posted by SV Silhouette at 3:09 PM