A Visit to Hunga

After spending almost a week in Neiafu, where we acquainted ourselves with the Tongan people and language (most people also speak English in addition to Tongan), we headed out of the port city to explore some of the outer anchorages. The Vava’u Group is a cluster of wooded islands not unlike the San Juans or the Gulf islands (familiar islands to many sailors from the Pacific Northwest.) Neiafu is found on the largest island, Vava’u, but there are over thirty other islands in the group. The islands are picturesque; the anchorages are relatively secluded; and everything is close together, making this a wonderful cruising destination.

The first island we visited is on the far west end of the group:  Hunga.

Hunga appears to be the old fringing reef of a volcano. Hunga almost completely encloses a lagoon inside a sunken caldera. There is a narrow opening between the rocks on the west side, through which boats can pass on an incoming tide. Two mooring balls appear to be the channel markers shown on charts.


The views from inside the lagoon are exceptionally beautiful.


One of the first things you notice as you approach the anchorage on the northeast side is a steep road running from the village down to the wharf. The soil tracked on the road gives it an earthy yellow color when viewed from a distance.


When I first saw this yellow road, I imagined the villagers weaving an ingenious mat out of pandanus to cover the road surface with. Upon inspection through binoculars, it looked like the road was made of lumber. It wasn’t until landing in the dinghy that I could see that the road was made of sections of concrete.

A villager we met at the church later told us that building the road was a project led by an American who spends part of his year, every year, at the village.

In the harbor, we saw the villagers’ traditional outrigger canoes... 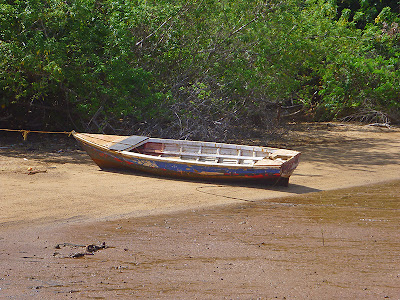 As we walked through the village, we noticed many scenes typical of Tongan life. We saw two churches. Both had bell towers, which we could hear from the anchorage.


We didn’t find the path to the cemetery but saw it from a distance. Colorful quilts were hung by some of the (we assume more recent) graves. School was in session as we walked by, and you could see and hear the uniformed students reciting something through the open classroom door.

Rain water is stored in cisterns on Hunga, and the majority of cisterns there were stone or cement.

Apparently, there is no universal sewage system, because we noticed that many homes had an outhouse/pit toilet. Corrugated tin, along with stone, wood, and plywood, was used as a building material for homes and sheds.

The pigs on Tonga are allowed to roam free. Those we saw in the Marquesas belonged to individual families and were tethered. I don’t know whether the pigs in Tonga are individually owned or communal (some are clearly wild); but in any case, pigs wander through front and back yards and forests freely. They are much cleaner and look much healthier than pigs whose movements are restricted by being tied up. Another consequence of unrestricted movement might be the large numbers of piglets we've seen in Tonga!

A similarity between Tonga and French Polynesia is that there are mangoes everywhere. The crop was ripening as we arrived.


It is difficult to anchor in Hunga due to the fact that most of the lagoon is covered with reef. We didn’t feel like we had a good set after multiple attempts in several different locations, so we moved on after one night in this peaceful anchorage.
Posted by SV Silhouette at 11:22 AM