Niue: Island of Caves and Graves

Of course there is more to Niue than its caves and graves. However, these two aspects of Niue and Niuean life give the island some of its character and mystery, and they are part of what make Niue stand out among other South Pacific islands.

In the South Pacific, a region stippled with coral atolls, Niue is one of a relatively few islands that represent upthrust coral atolls. The islanders call Niue “The Rock,” because it is now a chunk of coral limestone sitting on top of a former (sunken) volcano. It is hypothesized that the now-dead volcano was covered by sea level rises throughout history. As the volcano ceased being active (a process not connected to the sea level rise), it cooled and shrank. The slow rate of this cooling process allowed the fringing reef growing around the former volcano to keep pace with the cooling and shrinking of the volcano, until the volcano was covered with a “cap” of coral. The middle of the island represents the atoll’s former lagoon, but even it is now covered with (weathered and eroded) coral sediments.

If you look at the perimeter of the island, you can see two distinct tiers of the atoll. The picture below does not show them very well, but the upper tier sits on top of the wider, lower tier like the top layer of a wedding cake. The eroded groove at the shoreline is part of the lower terrace.

These represent terraces built by coral and coralline algae over different time periods. Today, a new fringing reef is growing around the outside of the island.

Many of Niue’s caves along the coast are accessible to visitors, and Patrick and I enjoyed exploring them. The contrast between such an experience on Niue and the same experience in the United States was huge:  There was no entrance fee, and although there were cautions such as, “Please use the ropes provided as handrails,” or “Slippery when wet,” you could pretty much explore each cave at will. While a few areas were clearly blocked off for safety purposes (openings that dropped off to the sea, for example), in most cases, it was up to the visitor to use their own judgment to visit the sea caves safely. (Don’t get too close to an opening that surf is crashing through; snorkel in a cave at low tide, but get out of it when the tide starts coming in.)

The first cave I visited was part of a larger area called Togo Chasm. You had to wade to get into the cave, so Patrick, who had worn hiking boots instead of water sandals, did not accompany me on this one. This cave had a shaft of light coming down through an opening in the top like a beam of light through a cathedral window.

It was low tide while we were there, so not many waves crashed through the larger opening meeting the sea. I could imagine that the cave could be quite dangerous as the tide is coming in.

We visited a second set of caves above Motu Sea Track. This set of caves had two small caves linked by an open “courtyard.”

There were some nice limestone formations here. Both Togo Chasm and Motu Sea Track are on the island’s east coast.

Along the north coast of the island, the hike to Talava Arches leads you through a cave before you emerge at the vista containing the arches. The stalactites and stalagmites here had merged into impressive columns.


On another day, while touring the north coast of the island by bicycle, we stopped at Palaha and Avaiki Caves.

Palaha Cave was probably the most majestic cave we saw on Nuie. It had huge, open chambers containing fine examples of stalactites and stalagmites and other weathered earth forms. Being inside Palaha Cave was like being royalty inside a great hall.


Avaiki cave was named after the ancestral home of Polynesian people, Havaiki or Hawaii. In the old days, only those with high status could visit the cave. These days, the cave is open to anyone with patience or planning to wait for low tide. The cave is lovely with its muted pastel colors of chocolate, rose, lavender, and turquoise.

You can snorkel in the cave, but there are not that many different kinds of fish there. The cave isn’t deep enough for specialized cave dwelling species. Still, it is a unique experience snorkeling in a cave to which access is prevented when high tide sweeps over the reef.

I associate two types of graves with Niue:  literal graves and figurative ones. As far as actual graves go, the island is covered with them. Instead of interning people in cemetaries, Niueans bury their dead on the family land. Thus, there are hundreds of mini-cemetaries in the form of family burial plots located throughout the island. On land which has been passed down from generation to generation, it is not uncommon to see modern tombstones alongside ancient ones.

The tombs and headstones are as diverse as the people buried beneath them were. The oldest monuments are composed of stacks of coral limestone and marked with columns that were once living coral. 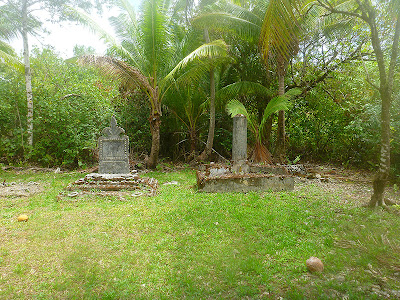 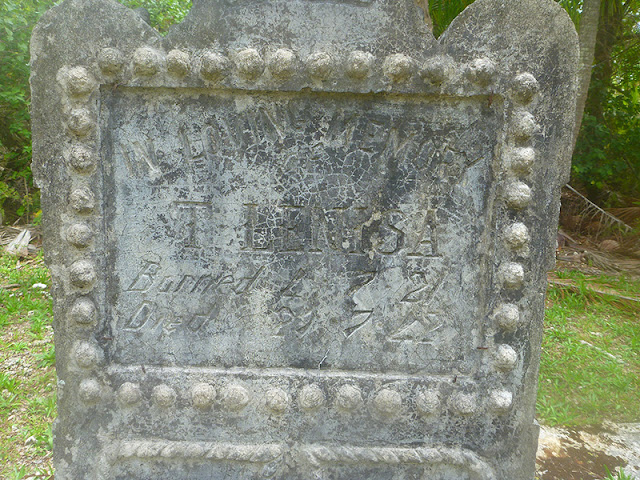 Somewhere along the way, marble replaced raw limestone as a material for tombstones. Modern Niuean headstones are made of polished marble, often with a picture of the deceased embedded in the marble. Instead of rectangular platforms of rock covering the tomb, the headstones are placed at one end of a cement slab. Sometimes the cement slabs are painted white.

Some of the modern graves both celebrate the life of the departed and bear elaborate evidence of the love bestowed upon them. 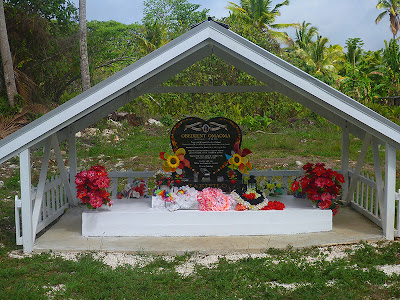 There is obviously a huge reverence for family among Niueans. Both Patrick and I were impressed by how the graves were maintained (the area around them mowed, etc.) and the fact that no matter how old the graves, people had left relatively recent offerings of rememberance.

Most of the graves held artificial flowers or wreaths made of such flowers. Some graves held fresh flowers---the more recently deceased, perhaps---but it appeared the fresh flowers were also left to mark an occasion like an anniversary or birthday. Some graves held empty wine bottles or jugs. Some of the graves held objects---clues, we supposed---signifying what the deceased enjoyed doing while alive. While driving down a bush track in the middle of the island, we came across a grave with a televison---actually, two televisions!---sitting on it. Another grave held an anchor and a wooden block carved with a traditional fishing hook:  It didn’t take much to guess that the occupant was a fisherman.

If there was no remembrance left at a grave, there were a couple of possible reasons why:   One, there could be no living members of the family left on the island; or two, the family could have lost their land. During the 2004 cyclone, the city’s land records were wiped out. Some families who were not living on the island at the time lost their land in the land re-distribution that followed.

Photographing graves is a sensitive issue, and the few graves pictured here really do not do justice to the tremendous variety and beauty of the myriad graves of Niue. Patrick and I both independently arrived at the conclusion that it would be a fascinating ethnological and genealogical study to map the graves of Niue, while tracing the family lineages as far back as records and memory allow.

In addition to the literal graves, there are figurative graves on Niue. These represent the ghosts of Niueans who have departed from the island.

It was once said of Ireland, “Ireland’s biggest export is its people.” The same might be true of the island nation of Niue, a country “in free association with New Zealand.” Niueans started leaving the country even before flights to their island began. Back then, they left on the supply ships called “banana boats.” However, ever since regular flights to and from their island began, Niueans have been leaving in greater numbers for opportunities elsewhere. After a 2004 cyclone which decimated parts of the island and robbed many people of their possessions, even more people left. The island is littered with abandoned homes, many which were abandoned before the cyclone and some which were abandoned as a result of it. These homes are testimony to those who have departed Niue. (Again, the pictures do not do justice to the wide variety and variable conditions of the abandoned homes found on the island.)

Like the Marquesas, Niue is a victim of a dramatic population decline. However, the core of Niueans that remains carries on the cultural traditions with an inextinguishable passion.

At Tomb Point in Alofi stands a headstone enigmatic of Niueans at large:

Posted by SV Silhouette at 1:33 AM