Juneau to Tracy Arm and Ice, the Great Carver

Our last anchorage before Juneau was in Funter Bay, at the junction of the Saginaw Channel and Icy Strait. We got to sail across the Saginaw Channel on a reach, the longest distance we’d sailed since our trip down to Redbluff Bay. Funter Bay was non-remarkable as an anchorage---and it probably wouldn’t be a good one in a blow---but as we passed Bare Island in the entrance to the bay, we saw that the fireweed was in bloom.

The next morning, we rounded the Mansfield Peninsula, the northern tip of Admiralty Island, and entered Stephens Passage.

We passed the Mendenhall Glacier en route to Juneau. As we approached Gastineau Channel, the channel on which Juneau is located, we began to see the influence of the glaciers north and south of Juneau on the color of the water. We saw hues we hadn’t seen since the tropics, only opaque and milky instead of air-clear.

(As an aside, many of the seaways in southeast Alaska have an interesting olive-brown color not seen elsewhere, a result of the tannins from the myriad yellow cedar trees leaching into the surface runoff.)

Juneau occupies a dramatic setting, at the base of steep mountains along the Gastineau Channel.

We had to anchor temporarily in a bay across from the town of Douglas before we could enter Harris Harbor. The bridge between Douglas and Juneau only has 51’ clearance at mean high water, and Silhouette’s mast is 50’ tall. We arrived during the full moon, the time of month with the highest and lowest tides. Patrick decided to wait for the high tide to ebb for a couple of hours before attempting to enter the harbor. Although we had enough clearance when we entered, it was still a challenge keeping the boat lined up with the high point of the bridge, due to current in bridge’s vicinity, and then making an immediate turn to starboard after clearing the bridge into the entrance of Harris Harbor.


We didn’t find Harris Harbor---or Juneau itself---particularly cruiser-friendly from a logistics standpoint. (The people we met in Juneau were very friendly and welcoming.) We probably wouldn’t make the long detour up the Gastineau Channel to resupply there again.

Downtown Juneau has become very much a cruise ship tourist destination:  At any given time, there are three or four large cruise ships at anchor in the channel.


Some of the downtown shops specifically catering to the tourist trade probably rival those on 5th Avenue in New York!


Seaplanes bringing tourists to and from the glaciers were also constantly to-ing and fro-ing from the port of Juneau.

Since Juneau is Alaska’s capital, it also has its share of government buildings, including the Governor’s Mansion.

Juneau has a history as a gold mining town. Led to the source by their Tlingit guide Kowee, Joe Juneau and Richard Harris struck gold in Gold Creek. While we didn’t visit the “Last Chance Gold Mine Museum,” some relics from the mining days---such as ore carts and a pulley-operated cage used to lower miners into the mine shaft and bring them up again---were stationed around the cruise ship terminal area. Unfortunately, the State Museum was closed for renovation during our stay.

Towering over Juneau is Mt. Roberts. We didn’t take the steep, five-mile hike to the top (from which you can either take a tram or walk down), but that seemed like something worth doing. We did take a nice forest walk that passed along an old wooden flume, used not for logging, but for hydropower in Juneau’s past.

From Juneau, we continued south along Stephens Passage.We had such fair weather the day we left Juneau, we didn’t make an intended stop at Taku Inlet, but carried on down to Tracy Arm. We passed our first icebergs in the inlet---and had a view of the Sumdum Glacier---on the way to the anchorage. We anchored in Tracy Arm Cove along with about half a dozen other boats.


The next morning, we were underway at 7:00 a.m. to make the trip up Tracy Arm to visit the North and South Sawyer Glaciers, a trip that has proved to be one of the highlights of our Southeast Alaskan cruise thus far. The gray skies had returned, but at least it wasn’t raining. Tracy Arm shares an opening with Endicott Arm; that’s why it’s considered and arm; but Tracy Arm is really a steep-sided fjord. It’s towering granite faces remind one of the massive rock walls in Yosemite and Zion National Parks, only these granite walls have been carved out by glaciers. Some of the faces look absolutely tortured with scars, as if barbed-wire and not ice, had carved out their features. Other rock faces were worn smooth by the passing glaciers. In this amphitheater, ice was the artist. In powerful, masterful strokes, the ice carved out Tracy Arm, and then---ephemerally---just melted away. It’s difficult to comprehend the powerful force of the ice and its transitory nature at the same time, but looking at this landscape, it’s impossible not to think about it.

Just as we arrived at the approach to South Sawyer Glacier, the miraculous occurred. The sun broke through just enough to highlight the deep cobalt and turquoise colors in the glacier ice.


You hear the calving glacier before you see it. Cracks, creaks, and groans in the ice precede actual chunks of the glacier falling off, creating seawater explosions like miniature mushroom clouds. This process, it appears, has been linked to giving birth, since the name for it is “calving.” We saw calving at both the South and North Sawyer Glaciers. The icebergs we saw all the way up the 25-mile long Tracy Arm, as well as in the anchorage and well out into Stephens Passage, all originated at one of the two glaciers. 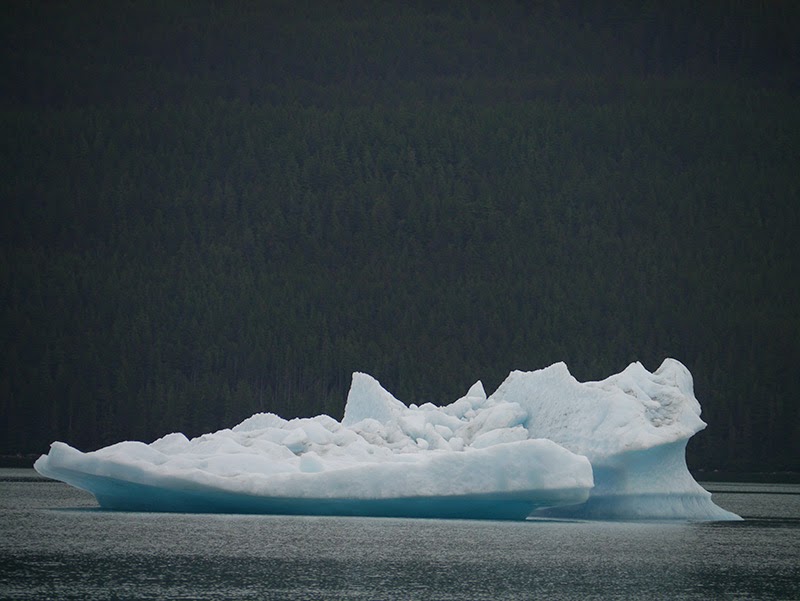 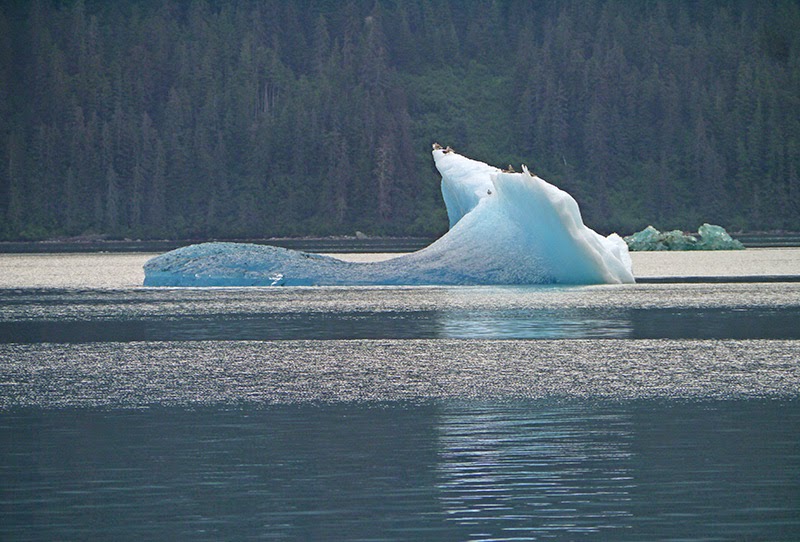 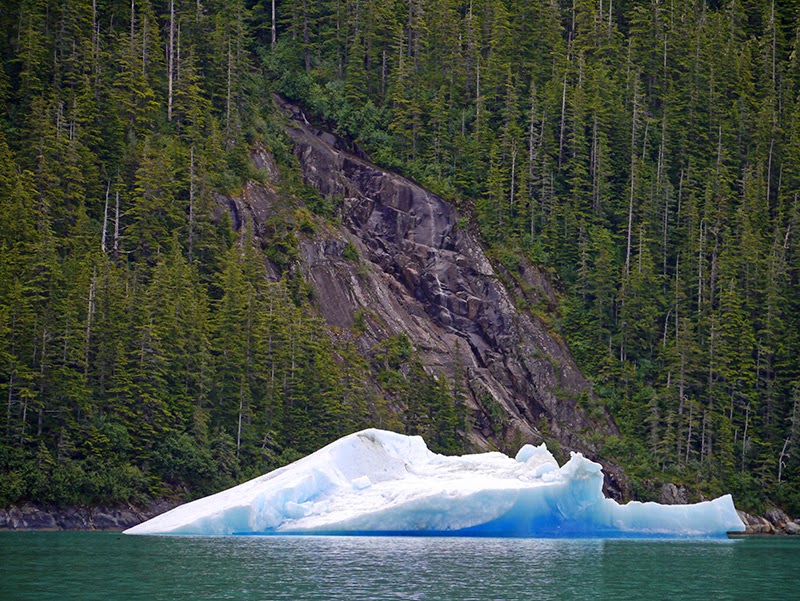 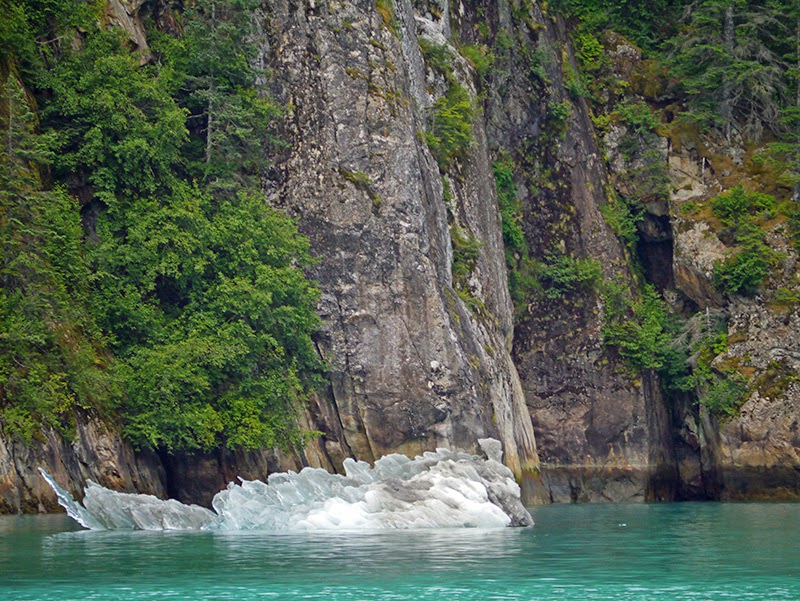 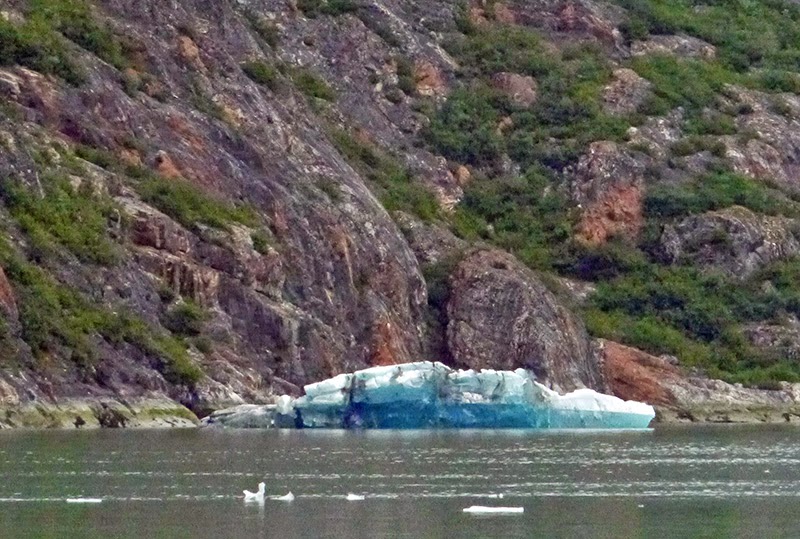 We also saw areas of bare rock at both glaciers which we believe indicate areas where the glaciers have receded (which is both a natural process and one that has probably accelerated due to climate change). Passing the entrance channel for the North Sawyer Glacier en route to the South Sawyer Glacier, we couldn’t even see the glacier. Patrick remarked that the last time he was there (2004), you could see the glacier from the main channel.

As we were sharing views and oohing and aahing over the South Sawyer Glacier, the crew of a motor-sailer (LaRose), with whom we had shared the anchorage the previous evening and the trip up Tracy Arm, offered us a ride in their dinghy to get a picture of Silhouette in front of the glacier. LaRose had about five people aboard and could leave a crew on the boat, while several people went out in the dinghy. I accompanied them in the dinghy and took this picture:

Patrick shot this photo of me at South Sawyer:

I had also snapped multiple photos of LaRose during the trip up Tracy Arm and in front of the glacier, which I promised to send  to the boat’s owner when we got to Petersburg.

After seeing the South Sawyer Glacier, we returned to the entrance channel for the North Sawyer Glacier. I was glad we didn’t pass it by, because once inside, we began to see our first views of the still-present glacier.

The channel was also alive with rivulets and waterfalls:  trickling, singing, roaring.


It was at the North Sawyer Glacier that we witnessed our most dramatic example of calving. An ice bridge over part of the glacier fell down while we were present!

We lost the sun before we left the North Sawyer Glacier and made the return trip down the Arm under leaden, slate blue skies. We set the hook in Tracy Arm Cove at 7:00 p.m.:  It had been a twelve-hour day in the presence of ice, the great carver.

Posted by SV Silhouette at 8:33 AM