It has been a bit over 2-1/2 years since this blog began and this will be my very first post. My, being me, Patrick, the Skipper of S/V Silhouette. While I have on occasion influenced some of the technical details included in our posts, I have left the stories of Silhouette’s travels in Kirsten's capable hands. I have started working on a "Boat" section with the technical details of the outfitting of what was a serious "project boat", the “what works and what doesn't”, the tools and techniques used, etc. Now that Silhouette’s open ocean passages are complete, at least for the moment, that section is in work and some of it will be published in the near future.

Perhaps it is the startling contrasts that prompt me to take to the keyboard at this juncture. Let me explain. When we made landfall in the Bay of Islands, New Zealand after the 1,300 nautical mile passage south from The Kingdom of Tonga, it was early in the Southern Hemisphere summer. As daylight broke and the spread of islands came into view, we saw them shrouded in swirling mists and reflecting green under the low overcast. We remarked almost in unison, “Wow, this looks just like home. It’s so beautiful.” It was a significant contrast from the heat and humidity of the tropical islands and atolls where we had spent the previous eight months. As we sailed north from New Zealand and wove our way through the Southern and Northern Cooks and then on to Christmas and Fanning atolls in The Republic of Kiribati, there were many contrasts along the way. In mid-May of this year we left the tropical breezes and sandy beaches of Hawaii behind and 2,550 nautical miles and 24 days later made landfall in Sitka, Alaska. Contrasts yet again. It is amazing how just a few short weeks of cruising can change everything. 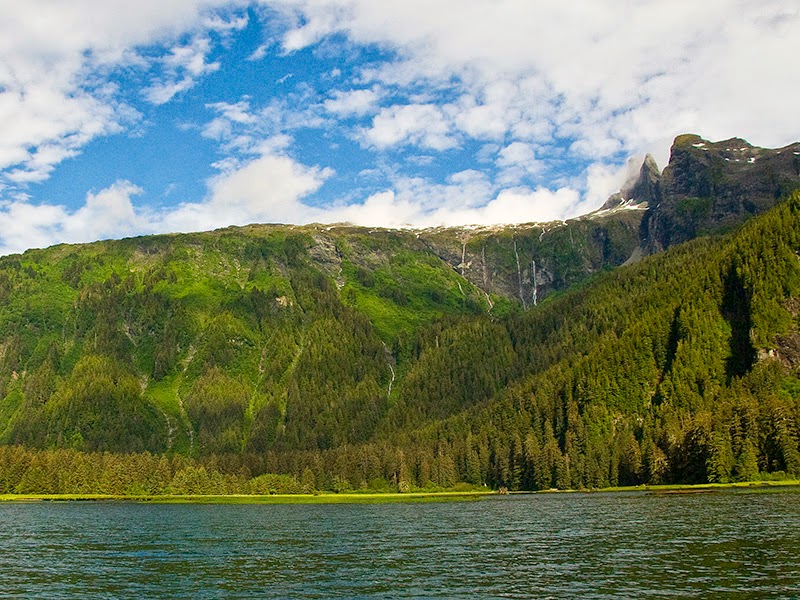 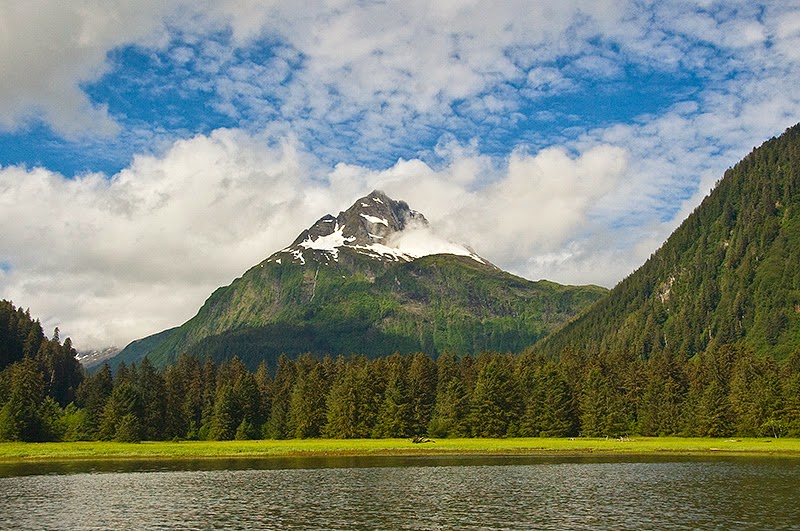 At this writing Silhouette is anchored on a narrow shelf of shallow water at the head of Red Bluff Bay, Baranof Island, SE Alaska. The anchor is down in 25 feet of water and the stern is perhaps 50 feet from the shore. Just 75 feet away the bottom plunges to 300 feet deep. In front of Silhouette a broad rock wall rises more than 2,000 feet above the water. That wall, as all the rock walls around the bay, is covered with vegetation in nearly every crack and crevice attesting to the tenacity of Nature. No less than eleven individual waterfalls cascade down its slopes. At the base they feed a broad meadow of grasses that display a dozen shades of green. The meadow is wholly owned and controlled by Brown Bears, also known as Grizzly Bears, the only species of bear present on Baranof Island. 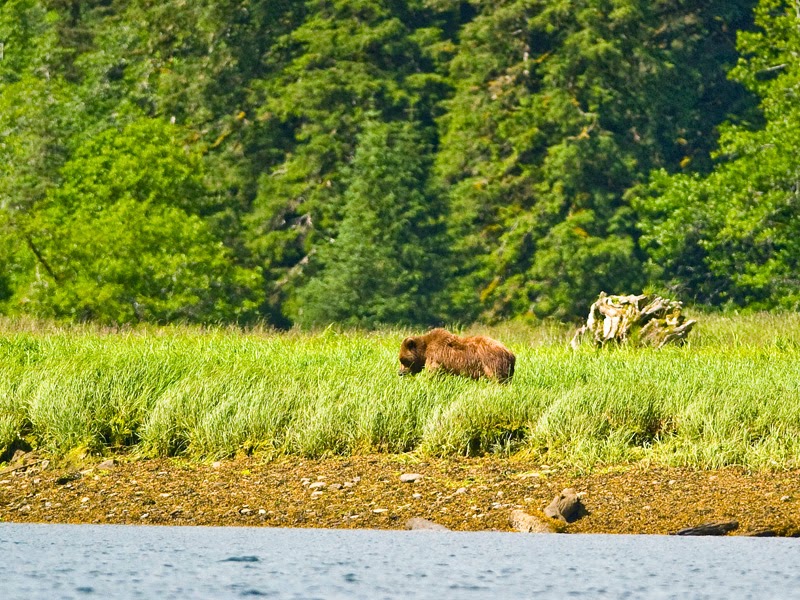 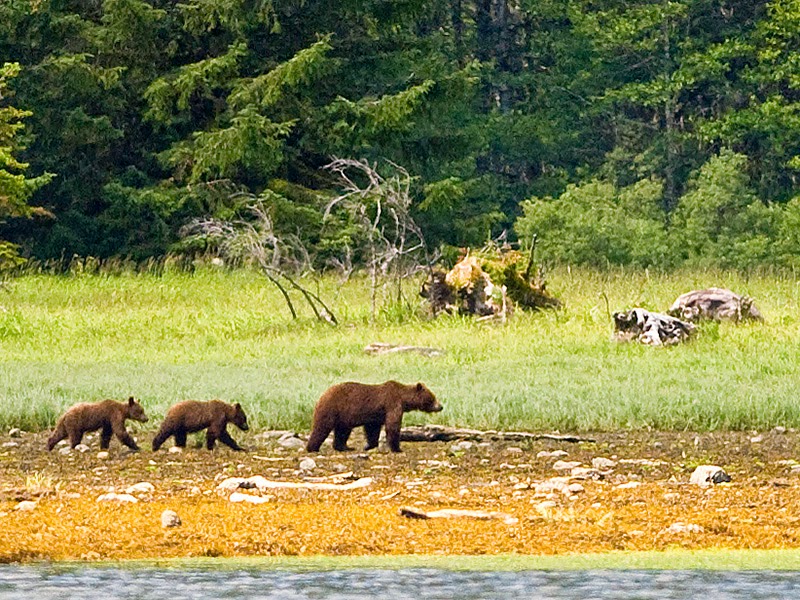 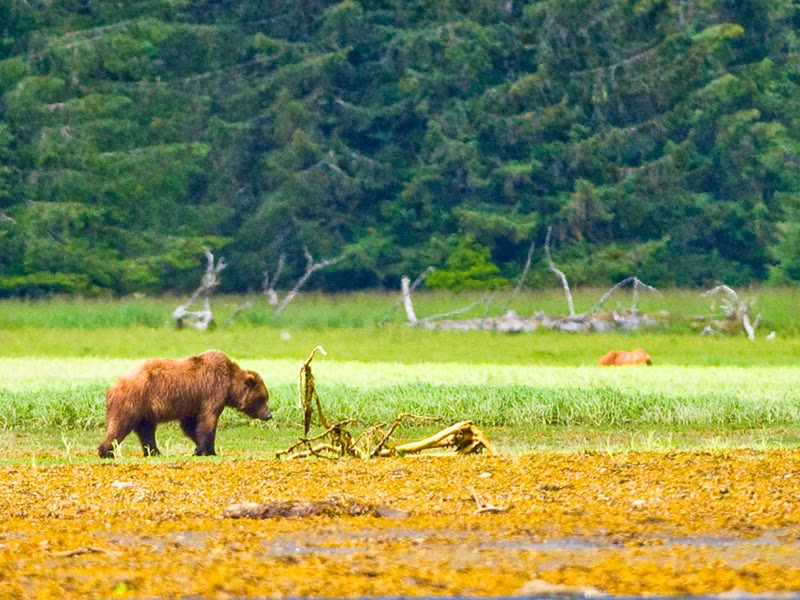 Behind the boat, across the narrow channel a few hundred yards away, a cascade twists and turns as it plummets 600 feet down the opposite slope, its tendrils of white water glowing in the evening light against the black rock channel it has carved out for itself over the centuries. Along the shore, otters glide effortlessly in search of their evening repast under the watchful eyes of the half dozen eagles visible in the trees. Mists slide along the cliff faces and at times dip and touch the water, then float and swirl above it. Minutes later they are gone. This is the magic that Southeast Alaska offers, and the setting allows me time to reflect on the long passage from New Zealand to Alaska. 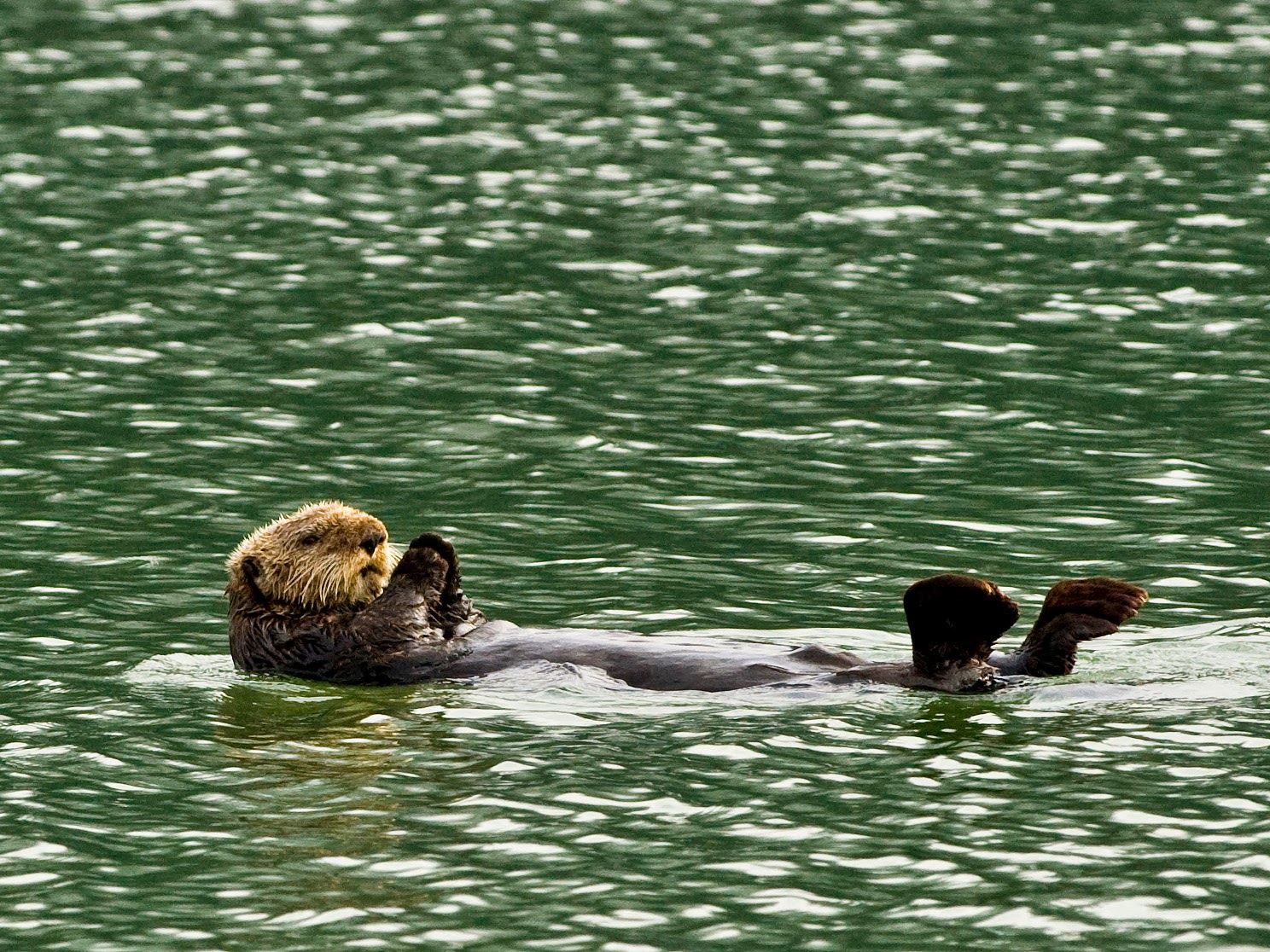 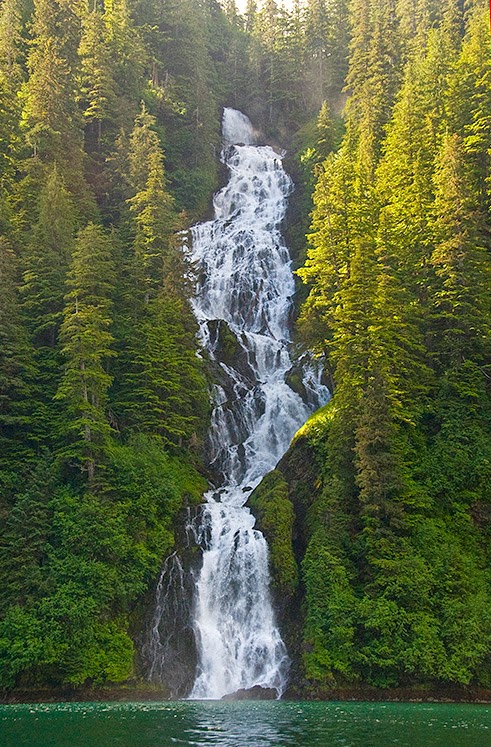 Silhouette sailed a series of passages totaling 8,450 nautical miles from the entrance buoy at Marsden Head, North Island, New Zealand to Sitka. She ranged from 39.5 degrees south to 57 degrees north, more than 96 degrees of latitude. She will likely add two more degrees in the next few weeks as she journeys to the northern edge of Glacier Bay at 59 degrees north. She crossed the International Dateline and Equator twice. She will have more than 22,000 nautical miles under her keel by the time she returns to Seattle later this summer.

The passage from New Zealand back to the Pacific Northwest is considered to be a formidable one as it is essentially an 8,000 mile beat to weather. Each year numerous boats are simply sold “down under” rather than sailed home. Others are shipped as deck cargo on cargo vessels or via specialized yacht transport ships rather than the crews facing the rigors of such a long upwind passage. In some cases health issues for the crew or family back home, or other issues demanding immediate attention, make those choices mandatory. However, for those who are considering getting the boat home on its own bottom and who do not have such constraints, I highly recommend that you give making the passage yourself serious consideration. In nearly 35 years of sailing it is easily my most satisfying accomplishment. It might be yours as well. In the near future I’ll write about the strategies we used in making the passage, which while challenging, was also safe, enjoyable and far more satisfying from the sailing perspective than the Coconut Milk Run.

Patrick
Posted by SV Silhouette at 8:02 AM