The Sea of Cortez is located over a rift zone or an area of spreading tectonic plates. Magma wells up between the spreading plates and hardens into new oceanic crust. From my limited understanding, some of the islands in the Sea of Cortez were formed when huge chunks of this former oceanic crust were uplifted by faults along the plate boundaries. The resulting landscape is one of striated layers of black, red, ivory and pink rock. I don’t fully understand what all the layers represent, but I think the black is hardened lava (basalt), while the pink is volcanic ash that has been "glued together" over time like sandstone. 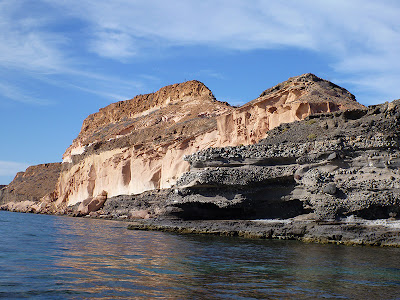 We had the good fortune to spend a week at two of these islands, Isla Espiritu Santos and Isla Partida (formerly joined together but seperated by the rift zone), before turning south to mainland Mexico. Each anchorage we explored had something unique to offer. Everything was completely novel compared to what we are used to in the Pacific Northwest, and I could easily understand how people could spend months or years familiarizing themselves with this island paradise.

These islands were so beautiful and we have so many pictures we'd like to share, that I am breaking this post into two parts to make it easier to load.

After being tied to the dock for a month, Silhouette was ready to stretch her legs (perhaps “spread her wings” is the more accurate metaphor), and we had a glorious sail across the San Lorenzo Channel to Islas Espiritu Santos. We anchored in the first open bay, Bahía San Gabriel. This bay is generally recommended only as a daytime anchorage due to its lack of protection from the southern winds, called coromuels, resulting from specialized weather conditions in this region, so we knew we were taking a slight chance by anchoring here. The forecast was for very light winds, however; and even though they did switch around to the south during the night, our gamble paid off:  The wind remained very light and we didn’t have to get up in the middle of the night to move the boat.

We weren’t the first or last to arrive, and by the end of the evening, we had six other boats joining us in the anchorage. It was a weekend, and I was glad we had avoided the more protected and popular anchorage of Caleta Partida for our first stop.

How many synonyms can I find for the word “beautiful?” Bahía San Gabriel is an exquisite natural setting full of several magnificent microhabitats. A picturesque turquoise cove and white sand beach are surrounded by scenic red cliffs.

Porcupine fish* wobble along their courses and crabs hover territorially over the sand inundated by mere inches of water. 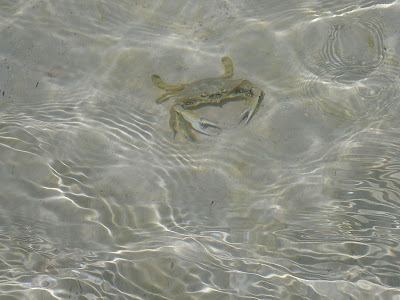 (*What I called “puffer fish” in my last post—the ones we have been seeing in Mexico with the stout spines—are actually porcupine fish. We saw a yellow one at the dock but are now seeing brown and white ones in the islands.)

The cove’s southern shore houses a delightful frigatebird rookery where the handsome colony rests, preens, mates, and raises its young.

Just inland from the beach is a vibrant green mangrove lagoon. 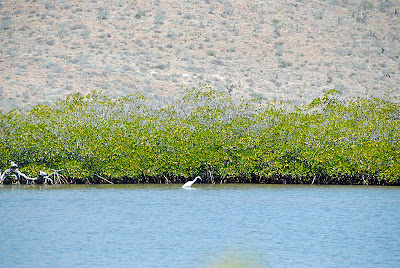 One has only to walk a few meters away from the shore, and the superb desert flora abounds. 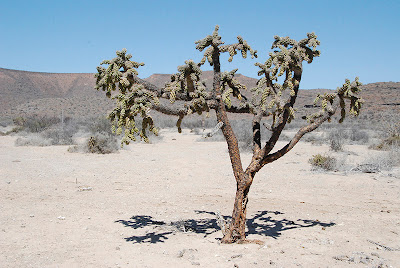 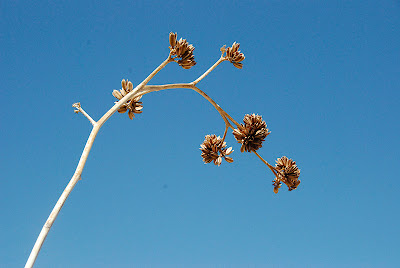 The trail across the island was one of the most unique I have been on. It was composed of bits of shells and fossilized coral, indicating that this part of the volcanic island was once underwater. 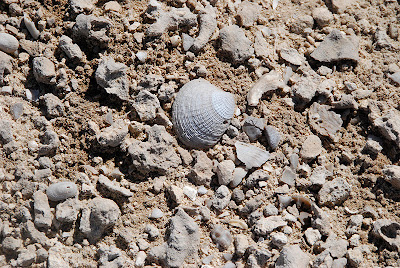 We saw large whelk-type shells and pearly oyster shells embedded among the cactus and igneous rock. 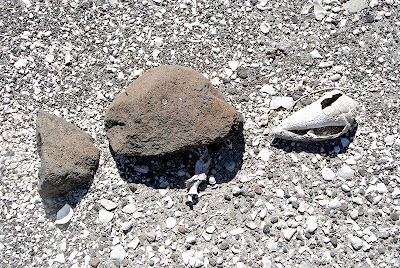 I wanted to make the hike across the island from Bahía San Gabriel to Playa Bonanza, and Patrick was willing to humor me in this endeavor. None of our guidebooks cited its length, and I estimated it to be about three miles from a scale on one of the chartlets. Once we got to the beach, an interpretive sign stated the hike’s true length:  five miles (or ten miles round trip). Since we did not get started until 11:00 a.m., it was blazing hot, and we only brought two liters of water from the boat, we had to abandon my goal among the saguaro. 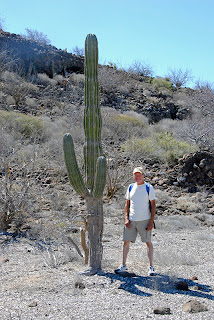 We were over halfway down on our first liter of water, and the beach on the east side was still nowhere in sight, so we turned around. We probably only did four miles round trip, but the walk was well worth it for the wide variety of desert plants and the black hare (endemic to the islands) we saw along the way. To complete the entire hike, we would have to start earlier in the morning before it heats up and bring at least two liters of water per person.

Not to be discouraged from having a good time, our attention turned to other activities. We took pictures of the boat in her postcard-perfect anchorage. 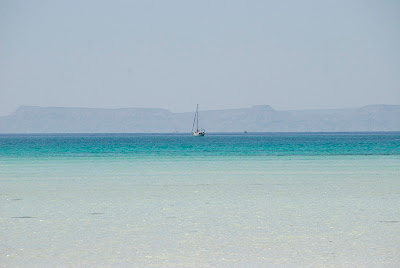 I swam half way back to the boat while Patrick protectively monitored me from the dinghy. 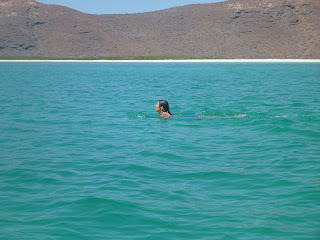 It was a good thing he did, because we discovered I couldn’t get back into the dinghy without a hand from Patrick to hoist me aboard. The pontoons of the dinghy were too high to get over! When we returned to the boat, we tied loops of webbing to the sides of the dinghy to act as steps (one short step and one long) and a grab loop to hold on to. I can now board the dinghy independently.

We took another dinghy excursion to explore the nearby reef and cliffs. These Sally Lightfoot crabs were a colorful feature of the rocks above the reef. 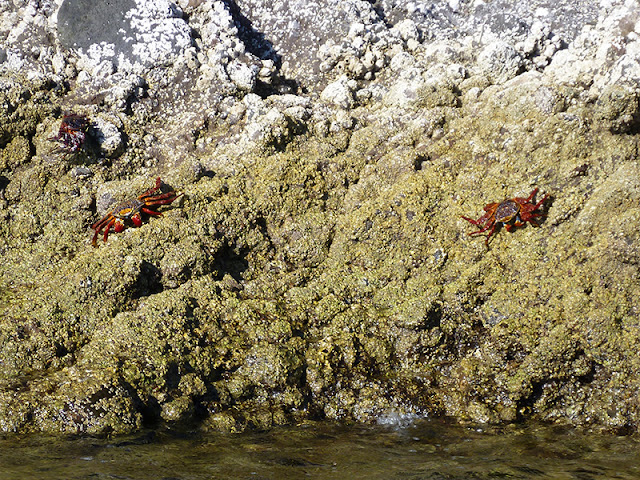 Our appetites were whetted for snorkeling by the many fish we saw swimming through the rocky canyons in the reef.

That evening while barbecuing, we noticed a pelican gorging itself on fish that were attracted to our stern light. Doesn't he have a handsome auburn mohawk? 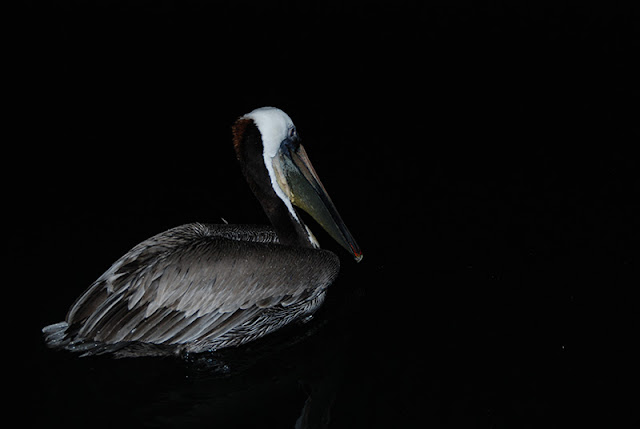 After dinner, Patrick entertained us by shining successively larger flashlight beams on the water beneath the boat. Literally hundreds of fish---many of them a foot long---were attracted to the light.

After trying our luck at fishing around three small rocky outposts along the coast of Espiritu Santos (islands Gallina, Gallo, and Ballena) and failing to catch anything, we next set the hook in the south end of Los Candeleros. Anne and Jeff Mott, who were directly across the dock from us in Marina Palmira, were anchored on Outrider in the north side of the cove. We had left the dock abruptly without being able to say a proper goodbye to our neighbors, so we were happy to be able to raft up our dinghies for a visit with them later that afternoon.

Los Candeleros is a smaller cove than Bahía San Gabriel and with its steep, red rock walls, felt snug and protected. It is still open to the coromuels, however, which again---luckily for us---didn’t blow like stink.

The major attraction in Los Candeleros is its two reefs, one shallow and near shore, and the other closer to the cove’s entrance. The reefs on Islas Espiritu Santos are rock reefs. Although corals are found on them, the reef structure itself is not composed of coral.

Although the water was just warm enough for me to snorkel in a bathing suit, Patrick (with exponentially less body fat) required his wetsuit, and the temperature of the water was the primary limiting factor to our exploring the larger (and deeper) reef. 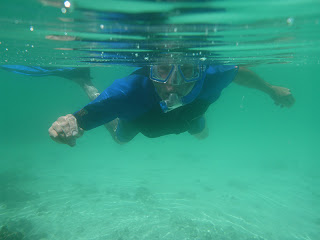 We found plenty to excite us in the shallow and warmer reef near the beach. We had a wonderful time playing with Patrick’s new underwater digital camera and discovered that invertebrates are less challenging subjects than fish because they sit still for the photographer!

Arguably the most spectacular cove among those on Isla Espiritu Santos is El Mezteno, just around the corner from Los Candeleros. It took us less than an hour to change anchorages; however, we exchanged the company of the large snorkel-kayak and panguero camps on the beach at Candeleros for the company of only one other sailboat in the small cove and a lone tent (from voyaging sea kayakers) onshore. A beautiful blue-green cove extended far inland, appearing like a river mouth instead of the head of a beach.

Our guide book showed a “hiking trail” near the head of the cove. We found a faint trail starting at the edge of the beach and then proceeded to hike up an arroyo full of red rocks and boulders leading up a canyon from the beach. (The arroyo was included in the brief trail description.) 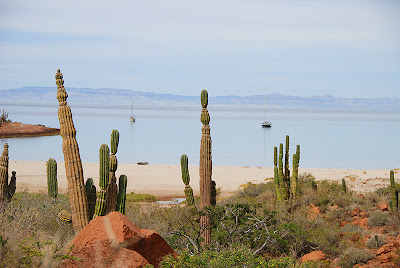 As the arroyo filled with brush and became difficult to pass through, we picked a trail through the rocks and cactus up the slope. We identified a low notch where it looked like we might gain the ridge and headed for that. All semblance of a trail had disappeared, and the “hike” became a Class 2 to Class 3 scramble. Once on the ridge, we walked along the canyon rim to see if we had undershot the trail by leaving the arroyo too soon. 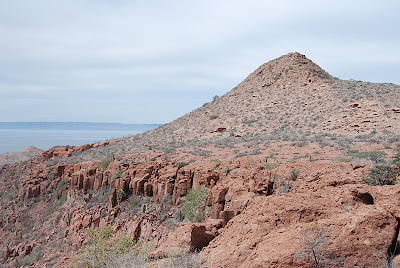 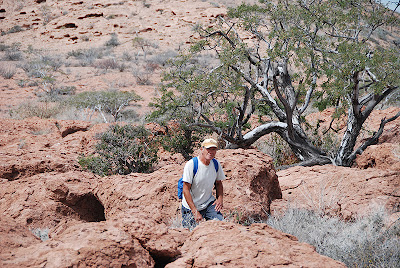 We did see something that looked like a trail at the head of the canyon; although, we saw no path less steep than the one we took (and much looser rock) to gain the ridge.

For anyone wishing to do this hike who is not up for a scramble, another method to gain access to the ridge might be to take a dinghy excursion to the end of the low shelf at the north edge of the cove. (You will need a dinghy anchor or a line to tie your dinghy to a boulder.) From there, another (less steep) arroyo leads up, and it looks like (we didn’t actually do it) a steep but clear hike up to the ridge.

On the way up to the ridge, we found more evidence of the unique geologic history of these islands. Look at the size of the scallop shell I am holding! (The island was covered with oyster shells this size too!) 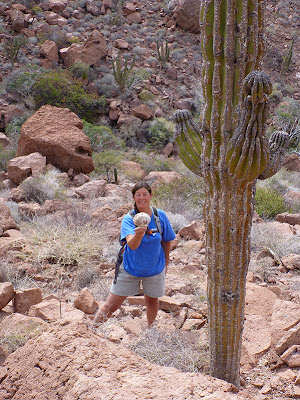 and the neighboring Caleta Partida.

When a boat anchors in Caleta Partida, it is actually anchored in the crater of an extinct volcano, two sides of which have eroded and almost completely subsided into the sea. (How cool is that?!)

The ridge top was littered with volcanic bombs. 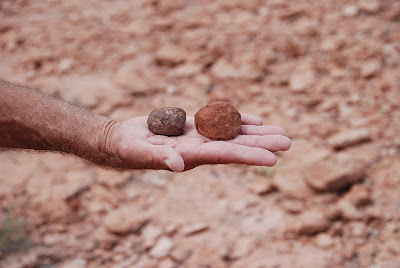 We pondered whether the numerous caves were actually formed by gas bubbles in the cooling lava? ( I later read that the pink layer was volcanic ash.) 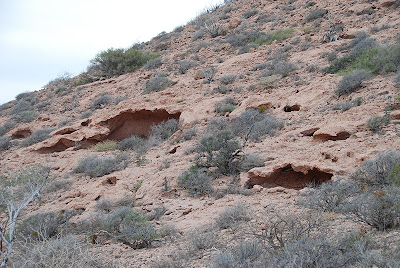 And the parade of unlikely desert flora continued… 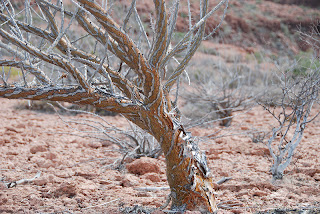 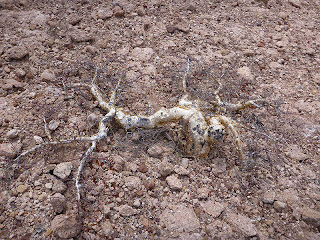 The beach held its own surprises, but since Islas Espiritu Santos is a national park, we followed the wilderness hikers’ motto:  Take nothing but pictures; leave nothing but footprints. 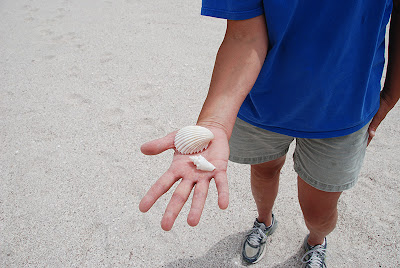 Anchored with us in El Mezteno were a British couple, David and Stella, on S/V Morning Star. We noticed that the kayakers who were camped out on the beach had gone out to their boat for a visit, so we rowed the dinghy over for a gam. The next day, I rowed over for a second visit. Both Stella (a zoologist) and David shared my enthusiasm for the unique plants and wildlife found on the islands, and it was fun to be in the presence of people who were just as excited about them as I was. Stella brought out her Fish of the Sea of Cortez and helped me identify some of the fish I had been seeing on my underwater forays. She also told me that many of the islands in the Sea of Cortez had reptile species only found on those particular islands (sort of like Darwin's finches in the Galapagos.)
Posted by SV Silhouette at 8:05 AM