As we close out our time at Marina Palmira in La Paz, I will look back on our stay here with fond memories. We have met some wonderful people, all of whom are pursuing cruising dreams of their own. For some, cruising involves an annual migration between the Sea of Cortez and another home in the states. Others have settled in La Paz permanently and use it as a home base for excursions throughout Mexico. Still others are traveling to far-flung places such as the Caribbean, El Salvador, the Galapagos, and French Polynesia. All of the cruisers we have met are self-reliant, basically laid back people, who enjoy working on their boats and glean a certain sense of satisfaction from making and doing things with their own hands.

Marina Palmira has also been a pleasant place to stay. The marina has all the desired amenities: shore power, water, showers, laundry room, and internet (although the internet connection can be painfully slow to non-existent.) The daily chores of shopping, cooking, cleaning, laundry and boat projects remain; yet, you wake up morning after morning to sunshine, and these chores are done in a beautiful setting. Here is one of my favorite views in the marina. 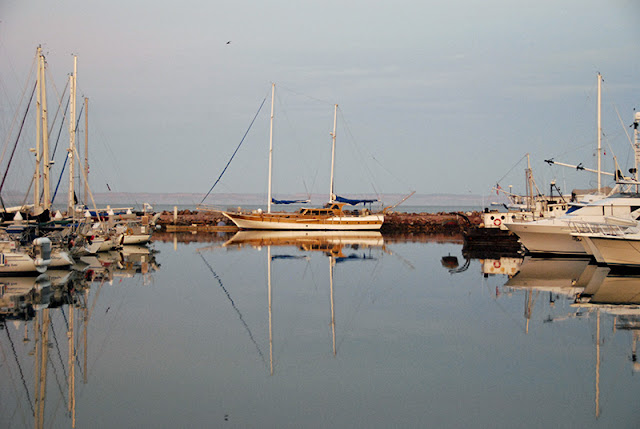 While Marina Palmira is far from the hub of cruising activity at Club Cruceros in Marina de la Paz, the members of the two marinas freely float back and forth for coffee hour or in order to exchange parts or information. Boaters monitor a “Cruisers Net” on Channel 22 at 8:00 a.m. (time in 2012) in which individual connections for swaps, trades, and local assistance are made in a flurry of boats hailing other boats after the net. 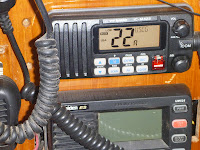 I haven’t heard so much radio chatter since I worked in Alaska, and it has made me nostalgic for the days when I listened to Miss Peggy give the weather report or eavesdropped on boat chatter in various fisheries in the Bering Sea and Gulf of Alaska.

Boaters aren’t the only denizens of Marina Palmira. We've had several flora and fauna firsts while at the marina. We saw our first coconuts ripening on palm trees: 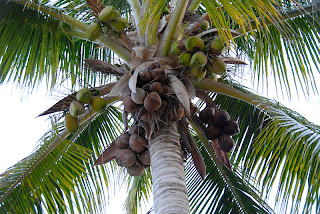 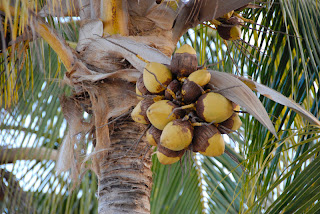 We also saw our first live puffer fish*. Patrick was working out of the dinghy and called me over to look at something under the dock. It turned out to be a puffer. They are yellow here---unlike the brown and white variety we see in aquaria in the states---but are equipped with the same stout spines.  (*We later learned that the fish we saw was a porcupine fish.)

There seem to be a resident egret and night heron here at the marina. Here is a shot of the night heron spotted in a coconut tree just after sunrise. 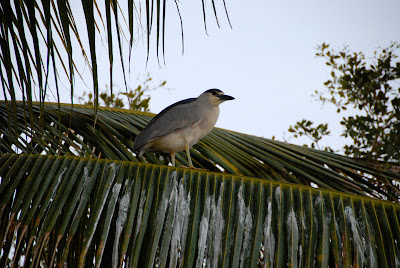 The egret, with its short stature, blue beak, and long, shaggy feathers, is not a species I’m familiar with. I have yet to capture its visage, feathers blowing in the wind, as it stands stoically on one leg on a rock wall at the end of the boat ramp. Just the other day, I saw a long (about two feet), sand-colored, tube-shaped fish (from the pipefish family?) apparently hunting prey near the shore. On warm nights, some kind of tiny fish or invertebrate swarms in the water and glows neon green. Upon close inspection, this tiny organism seems to emit a small, luminescent cloud around it. Unlike the bioluminescence of dinoflagellates, one doesn’t have to disturb the water to observe this continuous light. It transforms the water in the harbor into a summer night sky lit with fireflies.

Before arriving in Mexico, I had heard of the huge dog population with no leash laws and dogs running freely in the streets. I hadn’t heard about the feral cat population. We have seen some of these street dogs in La Paz, but here at the marina, there is a large resident cat population, including some who frequent the restaurants at each end (La Panga and The Dinghy Dock.) The restaurant staff feeds the cat at La Panga, so it can hardly be called feral. The cats at the Dinghy Dock however, barring handouts from restaurant-goers, are not above going down to the edge of the shore to try their luck at fishing.

Informal dock gatherings are common at Marina Palmira. Three or four evenings a week, someone wanders down the dock with a cocktail or a couple of people station themselves in camping chairs on the dock. That is the signal that happy hour has begun. Before long, a nucleus of dock residents have gathered around, sitting on dock boxes, cockpit seats, or simply standing. This tradition has been a nice way to end the work day and socialize with our neighbors before everyone disperses to make dinner. Sometimes, these informal gatherings turn into something more festive: a party on someone’s boat or a jam session with people playing instruments and others singing along. Several of the cruisers we have met are extremely talented musicians (Karen, on Sockdolager; Chris, on Ladybug; and Mike, on La Otra, to name a few), and we have thoroughly enjoyed this aspect of cruising life. Since we had been graciously welcomed to Dock 4, we wanted to have a gathering for the people on our dock before departing Marina Palmira. We invited people over for appetizers and drinks.

We had expected people to eventually flow below, where more seating room awaited, but everyone seemed determined to remain together en masse in the cockpit, jammed in like fish in the colloquial can of sardines.

These days, the marina is emptying. Everyone who is not leaving for the "Puddle Jump" (South Pacific crossing) is leaving for the islands in the Sea of Cortez or for the trip back up the coast (the "Baja Bash") to North America. Patrick and I are feeling the pull to move on too, as we re-stow the boat in preparation for leaving La Paz.

Posted by SV Silhouette at 6:18 AM