Another Rolly Anchorage, a Former Penal Colony, and an Epic Adventure

Before arriving at Isabela, we had read that this was a calm, protected anchorage, though smaller than it looked due to all the rocks and reefs in the anchorage. The latter part proved to be true, but we found Puerto Villamil to be almost as rolly as Puerto Ayora. Even though there were far fewer boats in the harbor than on both San Cristobal and Santa Cruz---and only a few water taxis---the swells created by the tour boats constantly zipping in and out of the harbor contributed to the motion in the anchorage. My overall impression of the island when we were there was one of relentless surf, and one of the local people we met mentioned that the waves were high during our visit, so perhaps that was a contributing factor as well. Indeed, on our last night at anchor in Puerto Villamil, we experienced the calmest night we'd had at anchor there, so it may have indicated a shift in the weather.


I cleaned Silhouette's waterline, bow, and transom while at anchor in Puerto Villamil. While cleaning the transom, I was either hanging on to the wind vane mount with one hand to keep from streaming backwards with the current, or trying to keep from being bumped on the head by the hull as the boat rode up and down with the swell. Conditions were not ideal, but I managed to remove the majority of the growth that would slow the boat down on our next passage. Hopefully, the next time that job is done, it will be in the calm waters of a placid tropical lagoon.

We had heard that Isla Isabela was the "best" island in the Galapagos in terms of things to see, and I was eager to explore it. However, I found that Isabela was less accessible in terms of things to see and do locally without a paid, guided tour. Cruisers are no longer allowed to visit Las Tintoreras, the series of islets surrounding the anchorage in which white tipped sharks and Galápagos penguins are found, in their dinghies. They must go on a guided tour. The port has set up orange floats beyond which cruisers are not supposed to take their dinghies or snorkel. Luckily, the wildlife doesn't recognize the orange floats, and one can see fish, bat rays, sea turtles, sea lions, and penguins swimming right through the anchorage. It would be easy to swim over from your boat and explore the outer edges of Las Tintoreras, as well as the reefs extending into the anchorage; however, the traffic and swell conditions in the anchorage did not make this feasible during the short time I was there.

We also did not take the snorkeling tour of Los Tuneles (lava tunnels), although we heard from other cruisers that this was a disappointment. They were not allowed to snorkel in the calm waters of Los Tuneles; the snorkeling spot on the tour was somewhere else with poorer visibility.

The mangroves next to the dinghy dock house a plethora of wildlife, and you can see many sea lion pups and marine iguanas there. The local hangout touted by our guidebook as a great snorkeling spot, "Concha y Perla," was disappointing in its low diversity. Low tide is best, and the farther you go out on the reef, the more you can see; but you have to be aware of tricky currents both in this area and in the channel between the snorkeling hole and the embarcadero. The sight of mangrove roots extending over the underwater lava flows was eerie and unique.

We didn't visit the tortoise breeding facility on this island. Although I was curious about the subspecies on Isabela (supposedly the largest in the Galápagos), we had seen a lot of tortoises on the other islands and were interested in a new experience.

On our first day in town, we checked out Laguna de Sal and found a stagnant, algae filled pond with a solitary flamingo.

On the second day, we rented bikes for the 10 km round trip to the Wall of Tears. Along the way, we saw the entire flock of flamingos at a much healthier looking Poza de las Diablas (a lagoon).


I would recommend this excursion, because there is a lot to see along the way. A short distance from town is Villamil's picturesque cemetery. As well as the flamingos, we saw huge numbers of marine iguanas at Playa del Amor and land tortoises along the upper reaches of the trail. A family we met on our way back saw three sea turtles at one of the viewpoints along the coast, but the turtles had not been there when we had passed by earlier.

Go on this outing prepared. It is a long hike in the hot sun, so for us, mountain bikes were the perfect way to go. The one bathroom we saw along the trail was locked, and there is nowhere to get water once you start. Although we brought water, we did not bring enough. Exerting myself in the killer heat and climbing (both on the bike and on foot) after being at sea level for weeks, lead to me beginning to feel the effects of heat exhaustion. We passed plenty of other flushed faces along the way too.

During the years 1946-1959, there was a penal colony located on Isla Isabela. As punishment, the prisoners were forced to build the Muro de las Lagrimas or "The Wall of Tears," an impressive stone wall made of blocks of lava intended to enclose them. 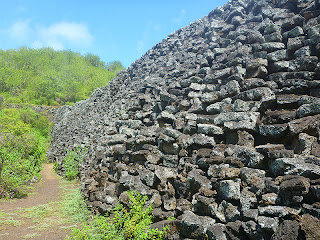 Clearly, it was a project that was never finished. 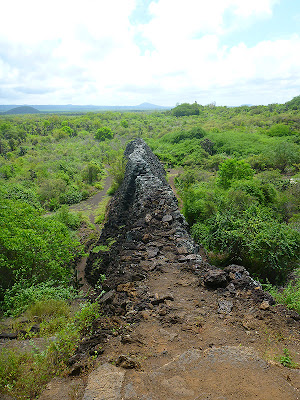 From the ridge above the wall (where one can imagine the guards keeping watch over the prisoners) excellent views of the island and Puerto Villamil can be had.


Near the Wall, you can also see the stone platforms that Americans from WWII built their barracks on. Before visiting the Galápagos, I wasn't aware of the American presence here during WWII. On Isabela, Americans monitored ship traffic for potential threats to the Panama Canal.

We weren't able to see and do as much on Isabela as we would have liked, due to the fact that our autografo was about to expire, and our time there was interrupted by a trip back to Santa Cruz. (Fellow cruisers: See that story in our "Special Pages.") However, our stay ended on a positive note with a trip to the sulfur mine inside Volcán Sierra Negra, a volcano with the second largest caldera in the world. (The first largest caldera belongs to a volcano in Africa.)

Our last day on Isla Isabela was to be our last day on land for the next three to four weeks, and we ended our trip with an epic adventure and a full dose of terra firma. One of the other cruisers in the anchorage had organized a guided tour and we participated, along with the organizer (a French-Canadian), his two boys, a French couple, and a German family with two kids. The four children on this trip ranged in age from two to eleven.

It was great spending the day with the Canadians and Europeans, because the majority of the conversation was in French: a nice transition into our next destination in French Polynesia. Although neither of us speak the language yet, it gave us the chance to hear the accent of native speakers. I even got one of the boys to teach me my numbers on the way to the volcano.

We started out with a three and a half hour horseback ride through lush vegetation along the flanks of the volcano. (The ride normally takes two hours, but they had given us docile horses due to the children, and the horses kept stopping along the way. Some of them had never been to the sulfur mine because it's not a tour frequently taken; consequently, they did not know the way and were a little skittish.)


We stopped along the rim of the caldera, where we could see steam rising from the fumarole we were about to visit, and had lunch. Then, we took a steep trail down into the caldera, hiked along a lava plain in which you could see the basaltic flows of the most recent eruption, and hiked up a slope of volcanic boulders and smaller debris.

This area of the volcano is locally called the sulfur mine, but the area is not actively being mined. It is called that because the sulfur deposits there are large enough to mine. As we approached the fumarole, the ground was littered with chunks of sulfur. There were also an abundance of white and pink minerals that our guide told us were still primarily composed of sulfur, but that the sulfur was mixed with other elements like magnesium and iron.


A fumarole is an area in which hot gases are escaping from an active volcano. At the sulfur mine on Volcán Sierra Negra, we were only 5 km---less than two miles!---above the magma chamber. Here, we had a window into Earth's interior, the respiratory and excretory systems of our seemingly living planet.

The ground around the fumarole was formed by a light yellow-gray sulfur crust. 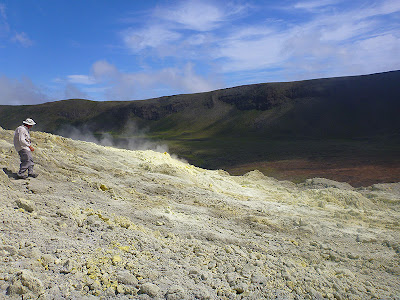 If you broke a piece off, bright yellow sulfur crystals composed the opposite side. 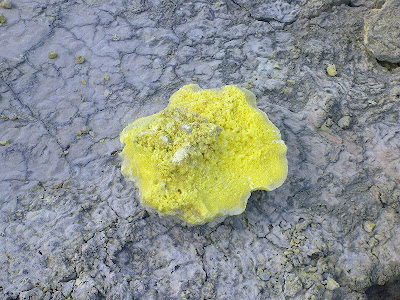 There were cracks and fissures in the crust over which you could scald your hand, if you held it above them too long, on the hot gases escaping from the inner planet! 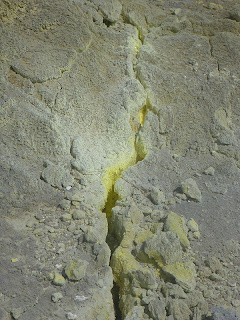 The volcano exhaled steam and sulfur (dioxide?) gases through larger vents. If the wind was right, you could walk close to them and actually look inside the vents and hear the sound of the hot gases escaping along with the wind blowing over the vents. But when the wind changed suddenly, we made a massive retreat, throats and nasal passages burning, to higher ground. This spot was truly one of the most amazing places I've ever been.

Then, it was back down the slope of volcanic debris, across the lava plain, and up the steep trail to the caldera rim. All of the children on this adventure with us completed this climb under their own steam. While the youngest rode on their parents' horses, they did all the walking themselves. The horses moved faster on the return trip (the proverbial "horses back to the barn" effect), but by the time we got back to the boats, it had been a full twelve hour day. As darkness fell, some of our preparations for sea went by the wayside, and the rest were completed the next morning before getting underway. Showers and dinner were the order of the evening before we collapsed, exhausted but happy, into bed.

Posted from sea via HAM radio
Posted by SV Silhouette at 12:11 PM