During our visit to Santa Cruz, we gained a deeper knowledge of some of the animals we met on San Cristobal. Our first stop was a visit to the Charles Darwin Research Station, just on the edge of town. Viewing wildlife here was like the experience of viewing wildlife in a well-designed zoo---not the animals' natural habitat---but educational and informative.


First, we learned more about how the finch species on the islands probably came from a common ancestor that flew here. (Wind and water---and today, human carriers---are the chief ways that new species are introduced to islands.) Genetic variation over time led to the variety of finches we see today, whose different beak forms made them successful at exploiting different food supplies. Here is an interesting quote about Darwin's finches from one of the interpretive signs we saw at the research station:

"The diversity of feeding habits and beak structure within this group is remarkable. The individual species feed in a variety of ways with each specialized in a particular way. Some eat seeds, some eat insects, some remove ticks from tortoises, some eat leaves, some eat flowers, some drink blood from seabirds, and there are two species that use twigs or cactus spines to extract insect larvae from holes in the dead branches of trees."

Who knew that finches were both vampires and tool-users?

At the research station, they have a tortoise nursery and adaptation pen similar to the one we saw on San Cristobal. On Santa Cruz, however, they do the work of incubating eggs and raising juveniles from all over the Galápagos islands before carefully transporting the young turtles back to their native island. Most of the Galápagos islands used to have their own subspecies of the giant tortoise. However, similar to the manner in which sea otters became endangered due to being slaughtered for their pelts, some of the giant tortoises went extinct due to being captured for meat.

Sealers and whalers passing through the area would capture hundreds of these gigantic reptiles and store them in the bilge of their ships before slaughtering them for meat. The conditions for the tortoises were like the conditions in which slaves were brought to America for sale. However, tortoises didn't have the "inconvenience" (read sarcastically) of having to be provided with food and water in order to be kept alive. The giant tortoises could live for up to a year in a ship's bilge without food or water. Imagine the plight of a seasick tortoise in the dark bilge of a rolly ship, removed from the smells of terrestrial vegetation and everything familiar to it, not knowing what's happening to it, and being deprived of even basic food and water, only to meet an untimely demise.

Now, there are eleven subspecies left. At the Darwin Research Station, one can see "Lonesome George," the only surviving member of his subspecies from Isla Pinta. George is estimated to be 150 years old, and despite sweeps of the island, no other remaining tortoises have been found there. George moves about as fast as you would expect a geriatric tortoise to move; however, he is no longer lonesome: two females (from other islands) occupy his pen with him. (Blogger's Post-Note:  Lonesome George died on June 24, 2012, shortly after our visit.)

In and around the wildlife pens at the station, we were able to get good views of the Opuntia cactus. In response to predation by terrestrial iguanas, this cactus has developed the adaptation of a hard trunk. The tall form has a trunk that looks similar to the bark of a fir tree. The hard trunk means the cactus is less likely to be eaten. Some of the tortoises like to eat the oars of the cactus when they fall to the ground.


The field guide Galápagos by Nigel Sitwell states that the word galápago is an old Spanish name for a saddle. This tortoise (Chelonoidis nigra) is originally from Española Island and exhibits the saddleback form of the tortoise shell. Most of the other pictures we've taken have shown the subspecies with the dome form of the shell. 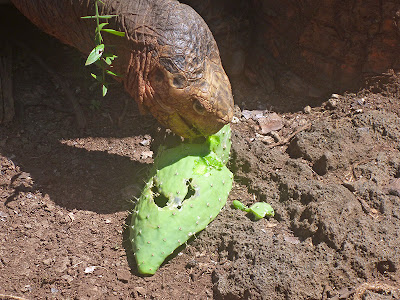 Upon arrival in the Galápagos, I was shocked to see how many obviously introduced and invasive plant species were in this supposed mecca of biodiversity. Since visitors to the Galápagos pay a hefty National Park fee ($100 U.S. per person) upon arrival, I was wondering why more funds weren't being used to combat invasive species. At the Interpretive Center at the Darwin station, I learned that a lot was being done to combat introduced species in the Galápagos, but that the focus has been on eradicating introduced mammals from the islands. Introduced mammals include goats, pigs, feral cats and dogs, non-native rat species, and cattle. Depending on the eating habits of the specific mammal, these animals not only compete with the native fauna for food (they eat vegetation, like the goats), introduced species also ferret out burrows and nests and eat either the animals themselves (such as cats and pigs eating iguanas) or their eggs (such as rats, cats, dogs, and pigs eating tortoise eggs.) Clearly, these mammals are considered the biggest threat to the native wildlife since conservation efforts are being focused here. Efforts have been successful, with some of the introduced mammals being completely eradicated from some of the islands.

Finally, we saw our first terrestrial iguanas at the research station. They looked sad and unhappy in their pens (hopefully, that is just anthropomorphizing) so we did not include a picture. .
Posted by SV Silhouette at 11:22 AM