Many of the following pictures accompany text from a previous post, Current Whereabouts, so they are not described in detail here. More detail is given for images not previously described.

Only a handful of families remain at Tetamanu, the village at the south pass.

Most of the huts belong to pensions (resorts) and dive shops. We read that the old village was devastated by a cyclone decades ago. We spent our first afternoon at the south pass exploring the old village and visiting the still beautiful church.

It was interesting to us how similar some of the construction of the old village was to the Marquesas, with the exception that the available building material had changed from basalt to coral sediments.

Other sites from the old village: 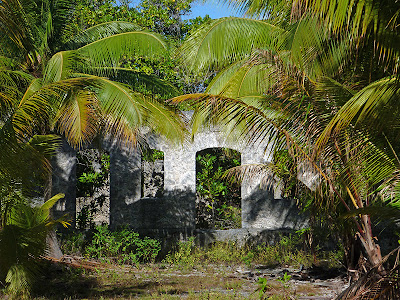 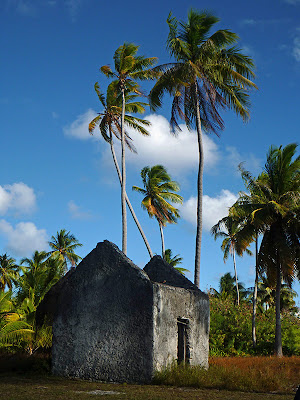 As for the church, it made sense that shell ornamentation had replaced the decorative wood and stone of the Marquesas.


The next day, and every following day when weather permitted, we got busy snorkeling.


The Titan triggerfish is one of the most interesting characters I met on the reef. I have amazing video footage of this fish either feeding or excavating a nest. (Apparently, they disturb the coral substrate to do both.) When I videotaped it, this fish was picking up chunks of coral as big as my fist with its mouth and depositing them to the side of a large hole it was excavating! The Titan was using its fins to fan away the coral dust from its hole. Maybe someday when I have a faster connection, you will see that video. Until then, a still photo will have to do. The smaller fish congregating around the Titan triggerfish's activity feed from the bits of coral and benthos (bottom fauna) it stirs up.

After videotaping the Titan triggerfish, I was so curious, I looked it up online. They are very territorial and have been known to attack snorkelers and scuba divers who come too close. I guess I got lucky!

The coral reef wasn't all about fish. There were some funny looking mammals swimming around as well. 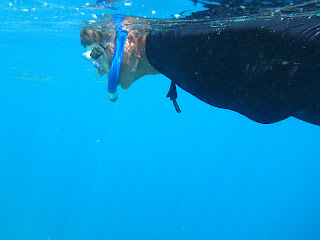 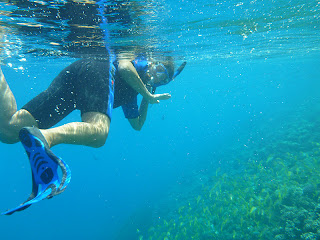 Our stay at Fakarava South was interrupted by a spate of bad weather.

Our resident canvas worker made a bag for the dinghy anchor, while I read my first book in a couple of months.

We also did a lot of cooking, baking, and eating. (We couldn’t do a lot of drinking because we were out of libations.)

….and made some new ones. We didn’t get a photo of our sister ship, Dream Time, but you can see their Cabo Rico here.

While the scenery at Fakarava was very similar to Tahanea,

the coral had broken down into sand on the beaches at Fakarava, making for easier walking on the lagoon sides.

On the motu, we discovered yet another kind of terrestrial (burrowing) crab. These were much bigger than the ones we’d seen in the Marquesas and constructed burrows in holes one to two feet in diameter! More than one crab was seen to occupy a burrow, while the crabs we saw in the burrows at Hanamenu appeared to be solitary.

We did not get a picture of our first coconut crab.

We didn’t want to leave, but after a week at the south pass, we moved on to the north pass (about a half day’s sail across the lagoon)  to resupply our fresh groceries. The village at the north pass, Rotoava, is much larger than Tetamanu but is a very quiet town. It was strange to see our first paved road and motorized vehicles on an atoll when we arrived. There are also many people riding bicycles in Rotoava, a first for us in French Polynesia. Some people rode bicycles for transportation in Taiohae on Nuku Hiva, but very few compared with those on Rotoava. The topography of the Marquesas is less conducive to cycling than the flat atolls of the Tuamotus.

A friend of mine asked where people on atolls get their fresh water, since there are no rivers, lakes or streams. Cisterns, used to collect rain water, are a common sight on the atolls we’ve visited.

In this case, the cistern is connected to the gutters on the roof of the building, but in many cases, they are stand-alone collection containers.

The north pass (Passe Garuae) is a very popular dive spot in its own right. Unfortunately, it’s less accessible to snorkelers than the south pass. Friends of ours on another boat had taken a dive boat to the pass and snorkeled while the rest of the party was diving. The agency we approached in order to do the same thing (Top Dive) said that their rules had changed and they no longer provided that service. We didn’t ask the two other dive services, Fakarava Diving Center and Dive Spirit, because we are only going to be here a short time.

It would have been tricky to anchor the boat outside the pass so we could snorkel the reef on the ocean side (recommended area for snorkeling), so we had to content ourselves with snorkeling the various reefs in the northeast corner of the lagoon. Unfortunately, we have been spoiled by the south pass. The visibility at the north pass isn’t as good, although there are a lot of fish.

The reef in the north corner of the lagoon is also a more degraded than at the south pass. I saw a lot more broken coral, more bottles and cans on the bottom, and even several large plastic bags draped over coral heads.

There are many pearl farms around the north pass which specialize in cultured black pearls.


Resupplied and ready to go, our next stop is the atoll of Toau. There, we will not actually go through the pass but will anchor outside the lagoon in a “blind” pass called Anse Amyot.
Posted by SV Silhouette at 10:27 PM