After the better part of a work week spent in Arue and Papeete reprovisioning the boat, taking on fuel, doing laundry, tracking down parts on the “boat buy” list (almost all of which remained elusive), and shopping for souvenirs, we took a break and headed out to see some of the island whose barrier reef we had been sheltering behind.


After looking into the bus route and discovering that we couldn’t even visit two destinations in one day due to the bus schedules, we decided to rent a car. Like many islands, Tahiti has a "belt road" that travels the island's circumference. Our trip started at Point Venus lighthouse, where Captain James Cook was charged with observing the transit of Venus across the Sun in order to calculate the distance between the Earth and the Sun. (Apparently, his calculations were grossly in error due to the inaccuracy of the measurement instruments of the time.) Point Venus had at least two previous names before its current one. 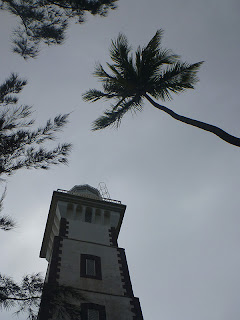 We continued on to Faarumai Waterfalls, a series of three cascades. We only made the short trip to the first waterfall due to time constraints.


The drive along the west coast of Tahiti took us along a scenic coastal road. There were popular surfing spots and rougher areas where huge surf crashed against the rocks along the island’s edge. The road was dotted with villages, so there was a lot of traffic, almost all of which was traveling above the speed limit.

Tahiti is actually composed of two landmasses, joined by an isthmus. The larger portion of the island, Tahiti Nui, is where Papeete is located, and the smaller landmass is called Tahiti Iti. When we reached the junction of Tahiti Nui and Tahiti Iti at the southern tip of Tahiti Nui, we took a detour to the Taravao Plateau. A beautiful country road winding through grassy hillsides on which cattle were grazing---looking more like America’s dairy country than tropical Tahiti---led us to the viewpoint at the plateau. From there, we had big picture views of Tahiti Nui and its barrier reef. On a clear day, you can supposedly see Moorea from this viewpoint, but we didn’t have the weather for that.

After a stop for lunch, we visited the Gauguin Museum and the adjacent Botanical Garden. These stops were somewhat disappointing. The Gauguin Museum was dilapidated and falling apart in places, and the botanical garden was equally not well maintained. The Gauguin Museum told the story of Gauguin’s life and evolution as an artist, but left out some significant details, such as the age of his Tahitian mistress (who has also been called a child-concubine): 14. The only works exhibited were prints or postcard-sized reproductions. There were some larger works (oil on burlap canvasses) that looked authentic, but---considering they were on exhibit in open-air buildings, exposed to the heat and humidity---were certainly reproductions. Since Gauguin died at Atuona, Hiva Oa, in French Polynesia, I thought the wood carvings that framed the doorway to his house, Maisson de Jouir (“House of Pleasure”) were probably the originals, but Patrick disagreed. There was no docent at the museum, and we were too insecure about our lack of French to ask questions of the only staff present, the woman who took our entrance fee (300 cfp in 2012).

We saw some beautiful plants at the Botanical Garden, but the lack of an interpretive side reduced our enjoyment. There was obviously some kind of self-guided tour at one time:  We saw numbers on some of the botanical specimens and signs (many broken or in disrepair) bearing the names of some others. However, we were not given a map or a guide to the walking tour, and the various routes through the garden (whose paths were delineated on a color-coded sign near the entrance) were not clearly marked once you embarked on a route. We concluded that the entrance fee (600 cfp in 2012) went mostly towards mowing the lawn.


The mape forest was one of the most spectacular parts of the Botanical Garden.


Since it was getting late in the day, we skipped the fern grotto (which appeared inviting from what we could see of it from the road.) Like the waterfalls, it seemed like this outdoor destination on the driving tour of Tahiti was one of the more pleasant ones.

I found the west coast of Tahiti Nui to be the most beautiful. The ocean was on the left, and high peaks that gave occasional glimpses into Tahiti's interior valleys were on our right.

Our final stop on the belt road was at a restored marae, or ceremonial ground, Marae Arahurahu. The size of the site was much smaller than those we had seen in the Marquesas. In addition, the modern renovations gave the site an almost cartoonish nature when juxtaposed with the ancient ruins. However, I reminded myself that this site is currently in use as a gathering place and ceremonial site and is therefore, living history.


The site had a "leaning stone," where important members of the congregation could rest while the priest was offering up prayers. The red horizontal platform is a table where offerings of food were (and perhaps still are) placed.


*We did learn that Marlon Brando actually owns an atoll north of Tahiti.

We missed the Museum of Tahiti and Its Islands in Punaauia, which in hindsight, probably would have been a better investment of our time than the visit to the Gauguin Museum.

On the way home, we stopped at the Intercontinental (formerly Beachcomber) Hotel for tropical drinks lavishly decorated with green orange slices and pink frangipani blossoms. We hit happy hour, so the drinks weren’t ridiculously expensive, but we ended up staying for dinner, which was. We wanted to see the Intercontinental’s Polynesian dance show and had time to kill. It was a teriffic review full of young, energetic dancers and eye-catching costumes. The show was amped up for tourists---fast paced and with a corny infusion of humor---however, the dance moves were authentic. We saw many of the same moves we had seen in the Marquesas; and although Patrick didn’t enjoy the show as much as the ones we’d seen there, I felt that the skill of execution and the pace at which the dancers had to perform made this dance show even more physically challenging than those we had seen in a more serious setting. The gala Polynesian dance show was a fitting end to our day out as tourists in Tahiti.
Posted by SV Silhouette at 12:12 AM