If you’re thinking that Marquesan, like Hawaiian, has a lot of vowels, you’re right. In fact, the Marquesan alphabet has just half the number of characters of the English alphabet. So many place names in the Marquesas begin with “H,” that we are constantly getting them mixed up and have to continually re-check our charts and guidebooks so that we don’t end up in the wrong anchorage!

As we left Anaho Bay behind, we continued our circumnavigation of Nuku Hiva with a short stop at Baie Haahopu. Patrick had seen this little bay on the northwest corner and had a hunch about it. Indeed, it turned out to be an extremely calm bay (the calmest anchorage yet) with excellent visibility. (Patrick was able to replace our prop shaft zinc here, which had been completely used up. Clear water---no swell---nice!) Haahopu was not the most scenic anchorage on the island, located next to a dock that had formerly been used to unload passengers bound for the airport (before the road from Taiohae was improved) and is currently still used to deliver fuel and supplies for the airport.

I had contracted some kind of a bug (flu or other virus) and spent most of my time at this anchorage sleeping or resting, but Patrick went in and explored the beach. He reported that there wasn’t much there to see. This low, northwest end of the island looked positively bucolic next to the temples of basalt we had just come from, and I kept expecting to see cows coming out from under the roundish trees on the hill. My strongest impression of the land here was that it gave off a wonderful herb scent like sage or lemon-thyme that I could smell strongly even from the boat.

With such clear water, I couldn’t resist going in to check out the snorkeling. There was very little to be found in the center of the bay, which was mostly a sand bottom, but there were small rock reefs and fish on either side of the bay. It was difficult to approach the good snorkeling areas due to the surge, and the best time to snorkel (like most places) was at low tide when the water was slack. The best snorkeling was actually found next to the man-made breakwater which had less surge than the opposing rocks on the other side of the bay.

If anyone out there is a Survivor aficionado, you might recognize some of the following landscapes from the T.V. show. Neither Patrick or I ever watched the show, but now we were here in real life! (We heard that during filming, the French gendarmerie was stationed at the entrance of the bay to insure that the participants/contestants on the show actually received no outside help or contact.)

After clearing the rough entrance to the bay (which apparently is typical even if the weather isn’t bad), we anchored in the right-hand, more protected lobe of Baie Hakatea (Daniel’s Bay.) Looking around, we saw an amazing illusion:  It looked like we were surrounded by land in 360-degrees! Being anchored in Daniel’s Bay is like being in the center of a donut! We had heard from other cruisers (who had escaped from Taiohae to Daniel’s Bay just so they could get a good night’s sleep) that this was a very calm anchorage. Unfortunately, that wasn’t true when we were there:  The wind was blowing hard from the southeast, and the anchorage was very rolly.

We anchored late in the afternoon but had time to do a little reconnaissance before it got dark. We took the dinghy over to the other lobe of the bay, where we hoped to land it for a trip to Vaipo Falls the next day. Breaking surf on the beach made the approach seem tenuous. It looked like if we hugged the rocks to the right during a calmer time period (it was high tide then,) we might be able to make it in. We returned to our lobe of the bay, where we had seen returning hikers board the speed boat bound for Taiohae, and landed the dinghy there. We found a path along the top of the basalt intertidal zone forming the north edge of the anchorage that the hikers had used to access the other lobe of the bay. This was our “Plan B.”

The next morning we started out early, about 8:15. The surf was still breaking, though not as strongly, but we headed in cautiously, staying close to the rocks on the right of the bay. Unfortunately, the river entrance was beyond the breaking surf, so we couldn’t go directly from the sea into the river. We beached the dinghy on a level spot of beach and then hand-pulled it along the surf zone to the river entrance. We rowed upriver and found a shallow lagoon where we could leave the dinghy, tying it to a palm tree in our absence.

We started out along the obvious path through the village of Hakaui. Shortly, we passed the home of a Marquesan who called out to us with a friendly greeting. This turned out to be “Teki,” a guy we had read about in the blog posts of the cruisers who came ahead of us. Since we were heading to the waterfall on a rainy, windy day, Teki warned us to be careful of falling coconuts, which the rain tends to bring down.

The beginning of the trail took us through beautifully landscaped Marquesan gardens.

We also passed some ruins and ancient tikis along the way. 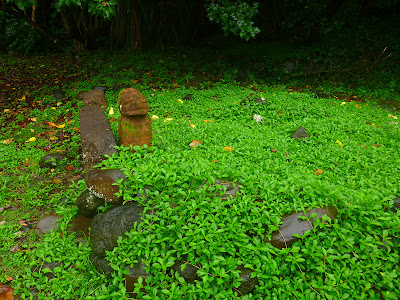 Then we traveled through a lush tropical jungle of sandalwood, palms, ferns, and cycads. We always kept looking overhead and tried to move swiftly through the areas of coconut-laden palms. There were two stream crossings requiring wading before the waterfall and two more in the waterfall valley itself. (The number of stream crossings along this route probably depends on the amount of rainfall.)

Our first view of the waterfall came when we were still quite a distance away. Vaipo Falls, the longest waterfall in the Marquesas, is a bit of a tease:  you can never see the entire waterfall from anywhere on the trail because part of it is blocked by basalt columns at its base.

A low wall made of lava boulders extended along the trail almost all the way to the waterfall. Deep in the valley we found more ruins:  paepae and possibly meae.

When we came to a sign warning us of falling rocks, we knew we were getting close.

If I hadn’t read about the hardhats found along this trail in posts from other cruisers, I probably would have failed to turn over a green basket along the side of the trail. But I saw a heavy tarp-like white bag peeking out, and inside, were the hardhats. Patrick and I each donned one, wishing we’d had them earlier when we were going through the coconut groves.

The waterfall was located in a steep rocky canyon.

Everything in the waterfall valley was lush and green.

From up close, all we could see was the base of the waterfall, peeking out from behind basalt boulders.

The muddy pool did not look inviting, so for once, I did not go swimming. There was a route behind the boulders to the waterfall’s “inner chamber,” where it might have been less muddy, but in the current weather conditions, I doubted it. With all the rainfall, we probably would have had to swim, rather than wade, into the inner chamber, so we left it unexplored.

For some reason, Patrick took a lot of pictures of me during this hike. Here are three of my favorites:

The hike was marked by many cairns in the more difficult-to-follow areas, so it was easy to find your way. Some of the cairns were works of art in themselves and looked like small tikis. Here are some more typical cairns along the trail, with Patrick leading the way.

On the way back down the trail, we passed both a couple from another boat and a large group of day hikers from the speed boat (between Taiohae and Daniel's Bay), and were glad we had gotten an early start.

We saw an ancient tiki we had missed on the way up. Patrick though it might be tabu to sit on the wall next to it, so he posed by it very respectfully.

We also saw this pair (one old, one new) of tikis on someone’s garden wall (a former paepae):


We had experienced several downpours throughout the hike, and as we returned to Daniel’s Bay, the weather was deteriorating. We decided there was no point in spending another rolly night there, so we pulled up anchor and headed the four or five miles back to Taiohae.
We weren’t really thinking about it at the time, but it was Friday the 13th (of July.) The next day was Bastille Day, and it was going to be the high point of the festival activities that had been taking place in Taiohae all month.
Posted by SV Silhouette at 10:47 AM