Most of our initial impressions of French Polynesia were formed on the island of Hiva Oa, where we made landfall. They may be somewhat skewed by the fact the island is the third largest population center in the islands (Nuku Hiva and Ua Pou are larger.)

The first thing we noticed (next to the visually stunning topography) is that the islands are more modern than we imagined, considering their isolation. When we arrived at Hatauku Bay, the Aranui 3, a state-of-the-art supply ship/tour boat was in the process of unloading.

Although the traditional pirogue---an outrigger canoe---is still in use, its modern construction is of epoxy and fiberglass. 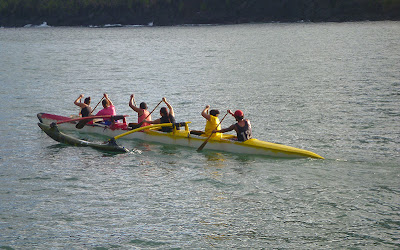 I was thrilled to see this primarily female rowing crew doing laps around the bay. Go ladies! 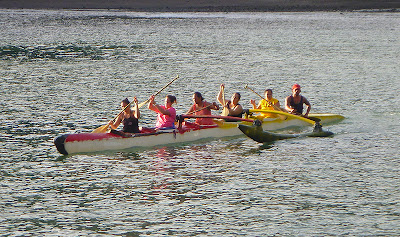 In some of the smaller villages in the valleys on the other side of the island, we did see some boats (not canoes) with wooden outriggers. 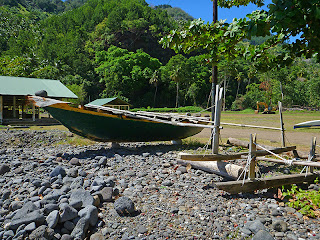 The dress code was also a mixture of the old and new. The Marquesan citizen below was dressed up for an event on election day,

but we also saw women wearing crowns of flowers as everyday wear. Traditional pareus, as well as more modern attire are worn by women, while men typically dress casually in shorts and T-shirts. Both Marquesan men and women are often adorned with traditional tattoos. The tattoos are done in simple black ink which makes the designs stand out more. Women wear tattoos behind the neck, on the arms and hands, and sometimes on the face. I also noticed a modernized stem, flower, and leaf tattoo worn along the thigh by a younger woman. Men wear tattoos on their arms, legs, and chest, and sometimes on their faces.

New four-wheel drive vehicles were everywhere (and the roads on the island warranted them, we were soon to discover!), and smart phones and i-Pods were ubiquitous.

However, once you got out of town, Hiva Oa was like being in the Garden of Eden. Although as of the year 2000, the population of the six inhabited islands in the Marquesas numbered only 8,000; even at its peak, there were fewer than 200,000 people (estimates vary). Due to the fact that the islands are not overpopulated, there is plenty and abundance for all, and people can live very simply off the land. There is livestock ---chickens, goats, wild pigs, and wild horses (probably all mammals introduced to the islands)---running free all over the island. If you catch it---it’s yours! Animals belonging to people are tethered and found grazing in fields or alongside the road.

The fabled tropical fruit trees are for real! Fecund trees hanging with fruit--- breadfruit, papayas, bananas, limes, pamplemousse (a gigantic variety of grapefruit, only sweeter), mangoes, green oranges, and of course, coconuts!---are everywhere. Patrick and I both came to the conclusion that it would be impossible for someone to go hungry here.

As visitors, it would be impolite just to help ourselves, so we ended up buying most of our food. There is bounty from the sea as well, and I was able to purchase fresh tuna from someone selling it out of a cooler in the back of their truck. (A vegetable truck and a fresh fish truck open up for business around 9:00 a.m. in Atuona, in front of the low rock wall near the Center for Marquesan Artisans at the end of the main road through town.) The vegetables in the markets are limited to what the supply ship brings (mostly root vegetables like carrots, onions, and potatoes, with some garlic, cucumbers, and green tomatoes thrown in), but a local woman grows additional vegetables (lettuce, cabbage, eggplant, green peppers, bok choy, and Chinese beans were available when I bought) and sells them out of the back of her truck. There are four magasins, or stores, in town, and while prices are high, there is a good variety. Fresh baked baguettes go quickly, but they are available every morning.

Marquesans hunt the wild pig in the island’s interior, and on our way back from a tour of the island, we came across some young men selling pig from the back of their truck. 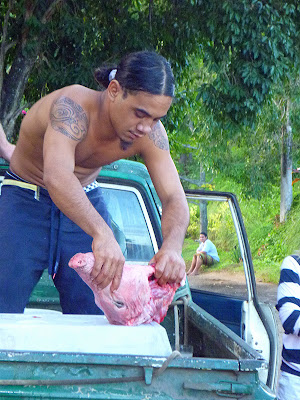 Marquesans have a rich history and culture that defies judgment from our own culture and society. They were a warrior people consisting of tribes living in isolated valleys on these islands. Intertribal warfare and conflict were common, and the biggest way of obtaining revenge upon their enemies was to disrespect them by cooking and eating them. Hiva Oa was supposedly the last island to practice cannibalism, a practice which reportedly ended in 1912. We learned very little about these practices while on Hiva Oa, but we did visit one archaeological site, the Iipona site at Puamau.

The site was beautifully landscaped with tropical flora, and the nearby forest was equally stunning in its beauty.

We did not make it to a second site at the village of Taaoa, a known place of human sacrifice.

We feel that we would definitely have a richer travel experience in the Marquesas if we knew the languages (Marquesan, French) of French Polynesia. At least in Mexico and Ecuador, I knew enough Spanish to ask intelligent questions and to understand most of the answers. In the Marquesas, we feel that we are coming away from the experience with a very superficial understanding of the culture. However, it is only our first island, and perhaps the facts and abstract concepts will sink in with multiple exposures over time.

Posted by SV Silhouette at 3:00 PM