While in Atuona, we again teamed up with the crew of Vent Fou (“Crazy Wind”)---whom we visited Volcán Sierra Negra with in the Galápagos---and the crew from another boat to visit the Iipona archaeological site at Puamau. Our taxi driver/tour guide, Marie Jo, gave us an overall tour of the east side of the island along the way.

We had packed a picnic lunch, but on the way out of town stopped at the many food booths that had been set up for election day. Since it is always more fun sampling the local cuisine, Patrick and I purchased some breadfruit salad (like potato salad) and roast pig, along with some kind of doughy coconut concoction wrapped in a leaf. Others in our group purchased raw fish and the dressing for poisson cru and taro root prepared in some kind of sauce.

We stopped and saw the enigmatic “Smiling Tiki,” an islolated tiki in the forest.

The Smiling Tiki looks like it is of more recent origin than the other tikis we saw on Hiva Oa. Although some of our group looked for evidence of other ruins in the area, none were found with the exception of this rock carving right next to the tiki. 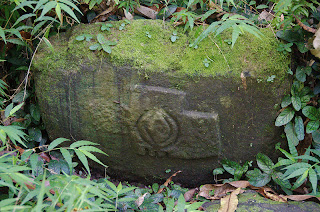 While we hiked to the tiki and back, Marie Jo was gathering mangoes from a tree along the roadside. We were past the mangoes’ peak season, but she managed to find enough undamaged specimens to provide us with a juicy treat upon our return. We showed her the treasures we’d found in the forest for her identification.

A long seed pod pronounced “pi-kye” in French (don't ask me how to spell it) held dark seeds with an edible white furry covering. The seed covering was sweet and delicious. 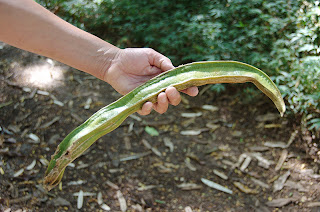 Here is a pandanus fruit. 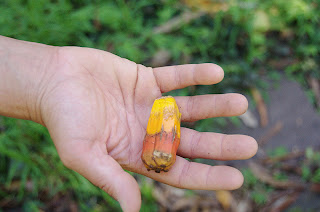 Pandanus is used to weave baskets, hats, and mats in French Polynesia; however, the fruit is inedible. 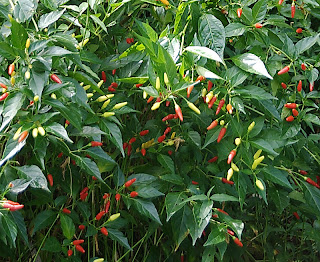 We stopped at a beach on Hanaiapa Bay near Marie Jo’s village for lunch. This bay was also a good anchorage, while most bays on the north side of the island are not due to extensive reefs barring the approach. We swapped tastes of our various Polynesian dishes over lunch before exploring the surroundings.

I asked Marie-Jo about this flower because I had seen many trees covered with these on our way down the mountain. 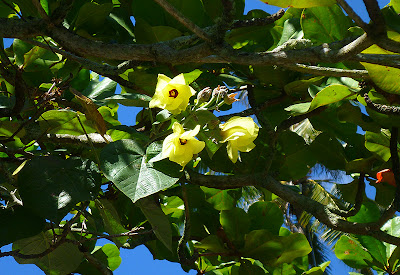 She explained that the wood from the tree it came from is used to make boat ribs and very fine ukeleles. Later on Fatu Hiva, we learned that this tree is in the rosewood group.

After lunch, we continued along the twisty road to Puamau, winding over mountains and past many beautiful bays and indentations in the coastline, and making one hairpin turn on the edge of a cliff. Each new valley seemed to hold a village where horses were grazing peacefully under the palms; while people swam, fished, dried coconuts, or hung laundry in the sun to dry.

Finally, we reached Puamau. Passing through the village and heading uphill, we arrived at the Iipona site. On the way up the hill, we had passed a young man in his truck. He turned around and returned to the site to show us his wares. He was a local artisan. He did beautiful work out of all natural materials. He had tikis carved from both the volcanic stones on the beach and the wood from the tree that ukeleles are made from. In response to a question from Patrick, he said he used diamond cutting tools to carve the basalt. He had a beautiful fish hook necklace also carved from lichen-covered, polished basalt. Finally, he had some necklaces made out of native seeds by his wife. I had not come prepared with a lot of cash; otherwise, I probably would have bought several pieces. The young man told us he was interested in working with bone, the boar’s tusks that many other local artists carve.

We saw a collection of tikis in the forest with two platforms on either side. The Iipona site followed the organization of a traditional Marquesan me'ae---a site used for rituals and ceremonies---and was constructed of different levels. Our guide, Marie-Jo, spoke both French and Marquesan, as well as limited English. Since we have limited Marquesan/French language skills, she was able to explain the basics of the site to us but not all the shaded nuances of meaning. She told us that the platform on the left was used for large meetings, 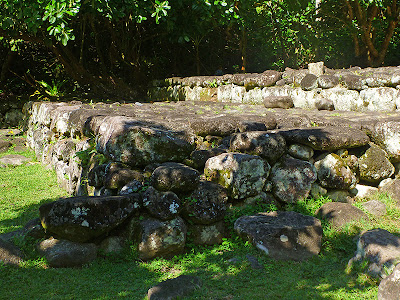 while the one on the right was used for prayer. 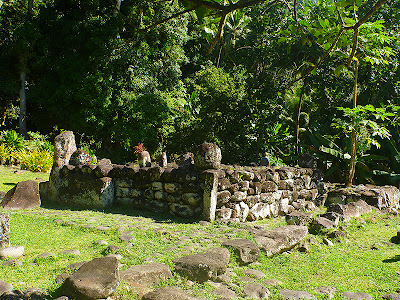 We noticed that the platform on the left had rock mortars or wells in it, which we had heard from another cruiser were used to hold tattoo ink for ceremonies. In a museum on Vaitahu, these were also designated as “polishing stones.” Two of the mortars or wells are visible in the photo below: 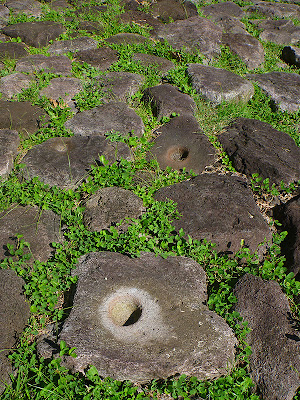 Currently, the dominant tiki on the site is a figure representing Chief Takai’i, though it may not always have been so. But who was Chief Takai'i and what did he stand for? All I know is that he was probably a chief of the tribe located in this valley at one time.

The signage at the site (which was multilingual) gave three interpretations for the female tiki situated behind the chief, but both the sign and our guide ended up calling her “the Chief’s wife,” which left me wondering if some of the history of the site has been lost even to the Marquesans living today.

There were also varying interpretations of this figure, which Marie-Jo told me was a fertility goddess.


Sadly, the story of the tikis seemed to be a story of vandalism by various parties. The missionaries who helped to colonize the islands were offended by the erect male phalluses on the tikis and knocked them off (see the photo of Chief Takai’i, above, and the ones below.)


Marie-Jo told us this tiki’s head was stolen by the Germans and is on exhibit in a museum in Berlin. The head currently atop the tiki is a replacement and, as explained by the signage on the site, is out of proportion with the tiki’s body. 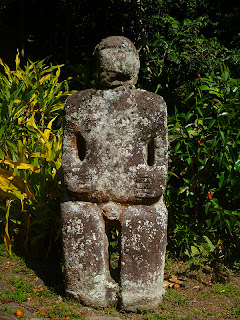 This tiki lost its head altogether, and our guide made much of its aberration of having six-fingers. I don’t know what the sixth finger signified, if anything. 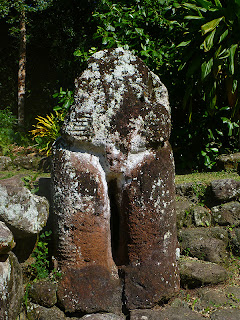 I came away from the site with an appreciation for the ancient ruins carved out of basalt but only a superficial understanding of their meaning.

The parting shot for this post is a view of the site from the side, putting our human endeavors into perspective. I like how the base of the mountain with its rock pile at the top looks like the grandest tiki of them all and dwarfs the tikis in the forest below. I am reminded that all of these rocks---even the mountain---will eventually be pulverized into dust by the wind and waves or perhaps someday be found on the bottom of a lagoon.