Nonos, An Ancient Village, and a Scenic Outdoor Bath

After leaving Tahuata, we returned to Hiva Oa for one last stop.

The anchorage at Hanamenu is on the north side of Hiva Oa and makes a nice jumping off point for Nuku Hiva.

The topography and vegetation are more stark and arid than on the rest of the island, and it is rumored that you can see a herd of wild horses if you walk to the top of the ridge. This area, along with the Terre Deserte on the northwest side of Nuku Hiva (which is also sparsely vegetated and dry), appear to be the horses’ favored territory.

It was blowing 20 knots in the anchorage when we arrived, and we weren’t sure we were going to stay. We put down the anchor to see how the boat would do. We didn’t drag anchor, but the skipper of another boat who anchored just before us decided to leave. The first afternoon, we didn’t even go ashore. Getting in would have been easy because the wind was blowing directly out of the north and we would have been carried in by the waves, but there was no rowing against the waves on the way back. We didn’t want to try putting the outboard on in those conditions with the dinghy riding up and down Silhouette’s stern two feet at a time. It was time to break open a bottle of wine and chill in the cockpit, enjoying our new surroundings. (Even when the wind is blowing 20 knots here, it’s still warm!)

The next morning, the wind had come down enough to go ashore. We landed our dinghy on the beach where we had seen the locals land their pirogue and set off in search of a freshwater spring we had heard about. The beach was dotted with mysterious holes that looked too big to have been made by clams:

The beach was also infested with nonos or “no-seeums,” which I did not discover until I got back to the boat and the bites started rising on my arms. I had hundreds of bites along both arms, as well as a few on my back and legs. I had seen maybe one or two of the tiny flying insects (sand fleas or sand flies) while on the beach and shooed them away. I wasn’t wearing bug repellant because I hadn’t read in advance that nonos were a problem at Hanamenu.

Our outdated information stated that Hanamenu was uninhabited, but in fact, there were several residents. One was even in the process of building a new home. The two residents we talked to both stated that Hanamenu was a sort of “weekend getaway” for them:  they lived in Atuona during the week. (We went ashore on a Saturday.) Following directions to the trail up the valley, we passed the beautiful freshwater pool. The first time we went by, it was full of children escaping the heat and enjoying the water.

Hanamenu is an ancient village site and there are many remains of paepae (raised platforms made of basalt that served as former home foundations) along the valley floor. 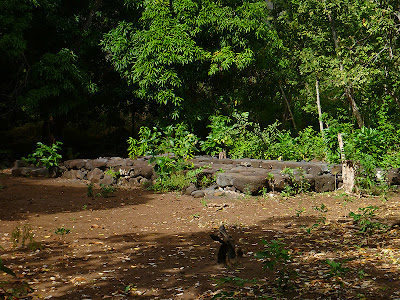 We found evidence of Marquesans inhabiting the valley during different time periods. For example, this structure contained lava boulders in its inner walls (like the construction of the paepae), but the boulders were encased in cement. Due to its shape, we wondered if this structure was a tomb, but it also could have been a root cellar. We had no one nearby to ask or explain it to us.

Some of the largest, most mature mango trees we saw on the island were at Hanamenu, and the ground was littered with pits. Unfortunately, we had missed their season.

In the village site along a dry riverbed, we saw this structure which appeared to be currently in use. I think it is an earth oven, used to cook roast pig and other Polynesian dishes; but again, we had no one to ask about this. I believe the strung coconut husks are lit and lowered into the pit, where they ignite the palm fronds.

We weren’t feeling that energetic and the heat made us even more lethargic. We did not feel like climbing to the ridge without cover, so we abandoned the idea of looking for the wild horses.

On the way back to the boat, we found the pool and spring abandoned. Bars of soap left on the volcanic boulders and an empty shampoo container nearby indicated that the villagers used the pool for bathing. However, it was the perfect pool for this as it was constantly being flushed out and the old water replaced with new fresh water. The outlet was at the end opposite the waterfall and was at a higher elevation than the stream below it. The pool’s contents were drained into a stream that ran out into the ocean. Overuse would probably result in polluting the pool, but the lack of population density in the village kept it clean and pure. The “waterfall” you see on the right side of the picture is actually piped in from the source:  The villagers probably modified the pool to suit their needs in order to fill water containers and perhaps shower. The real waterfall feeding the stream is to the left of my image, almost hidden in the lush foliage.

Although most of the tropical flowers surrounding the pool were on their way out, their overpowering fragrance remained, and one could imagine what the pool looked like at the peak of the bloom. Of course, I couldn’t resist jumping in and enjoying this beautiful natural bath. I hadn’t brought soap or shampoo, but I rinsed the salt out of my hair under the “faucet” and luxuriated in being completely soaked in fresh water. While I was in the pool, a local man came and started his bathing process (wearing shorts, and politely next to the outlet). After a few more minutes enjoying the pool, we left him to his privacy. The locals brought their bathing items to the pool in woven baskets (probably out of pandanus) and there was a bench nearby to leave clothing items or dry off.

That afternoon, the wind started picking up again. As we were joined in the anchorage by three more boats, one of whom had anchored too close to us, we decided to leave and make an overnight passage to Nuku Hiva rather than wait until the next morning.